This post briefly outlines an experimental fix I made to my spare lifting bar assembly. At time of writing, I haven’t swapped it in to the van to give it a good testing, so the jury is still out as to whether the repair works as well as it seems to on the bench.

While I was futzing around doing this repair, Dave commented that I should design something that could be sold as a kit for the Westy owner that doesn’t have access to machine tools, welding, etc. This is a good idea, unfortunately the approach I was taking doesn’t really lend itself to that. But it did give me some hints towards a repair kit.

I think most vanagon Westy owners know by now that eventually the pop top lifting assembly will wear out at the main hinge joint. It’s a poor design, a harsh steel on steel moving contact with no lubrication and insufficient bearing surface. Many other owners have fixed this problem by various means, welding up the worn surface is one example.

Andy, owner of the nice T3 Atlantic, “Wolfgang” (blog linked in list on right side of the page), recently had his lifting assembly re painted. It was his blog post on that and his comments to me that got me off my duff to try this fix.

I have a spare assembly, from my old 82 Westy. It’s galvanized steel, no paint like in the later Westies. The zinc coating has grown the characteristic white fuzz during storage in the barn. Here’s a pic of the hinge that is the problem.

A couple of notes on the hinge. The horizontal bar extends into the hinge through that collar ( with the screw) and near the end it get worn away. There will be a pic of that coming up. The hinge is folded up fully, as it would be when the top is down, and that steel cable you see running up over the round centre section continues down and back into the tube on the bottom where it connects to a spring. Again, more on that later. But as is, the assembly is under tension and wants to straighten out (tubes are tied together out of shot).

Remove the M5 machine screw from each end of the horizontal bar and then pull the bar out of the hinge. Are the ends of that bar worn, Or have you lived a pure life and the bar ends are sound? 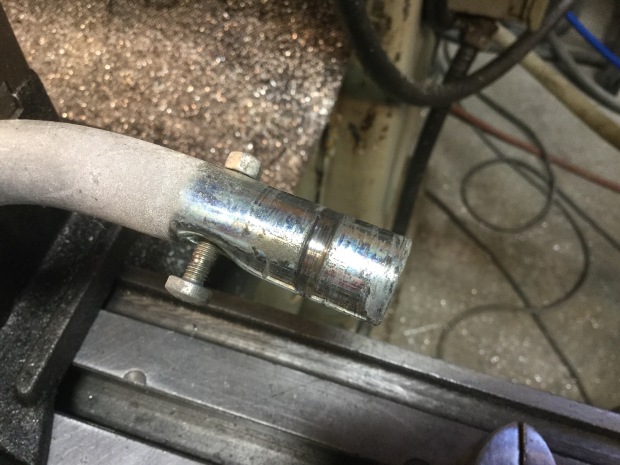 And the other end, even worse. 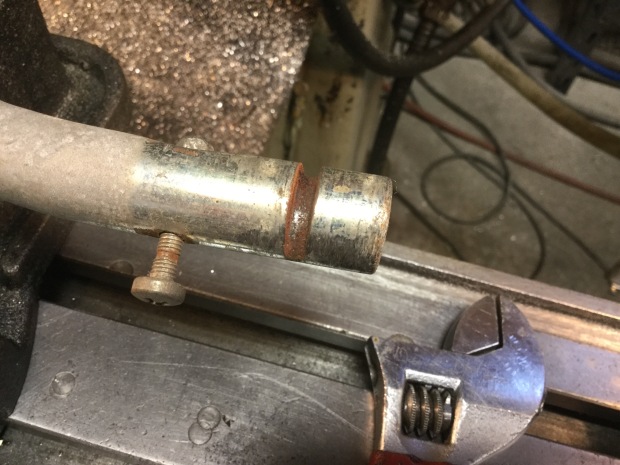 It’s really easy to take the assembly apart, apart from the annoying spring washers. Clip washers, starlock washers, must be other names for them too. I broke most of mine trying to remove them, but you can find new at the hardware store or auto parts place. When the hinge is relaxed, ie fully extended, and the pin that limits further extension is removed, the end of the spring cable can be detached and pulled out the bottom of the tube. Yes, the foot has been removed from the bottom of the tube. Another pin and annoying clip.

Greasy old spring and cable out. 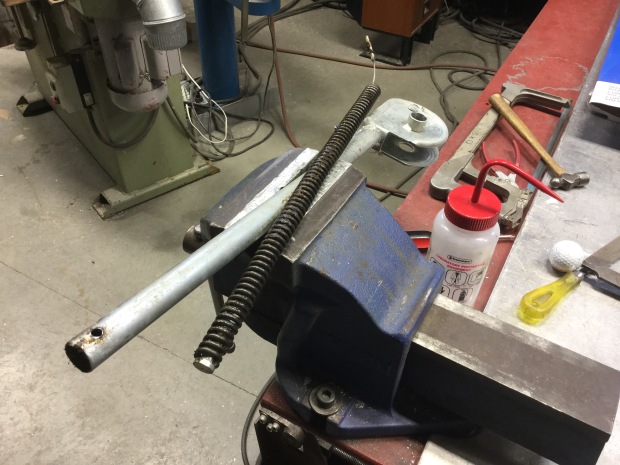 Ok, back to the hinge. Here we have the pair and its the edges on the  “not so round anymore ” holes in the flat bar welded in the ring that wear the grooves in the cross bar. I mean really, what the heck were the engineers at Westfalia thinking? 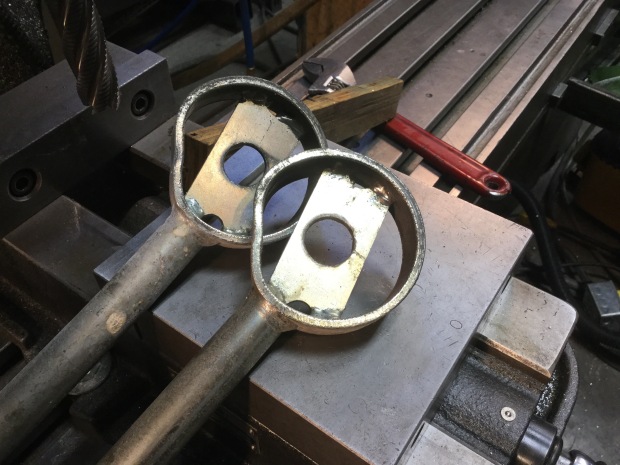 My fix is to bush those holes to create a larger bearing surface. First I had to make the holes more or less round again. 7/8″ endmill was over sized just enough. Truth is, it didn’t complete make round one of the holes, but good enough.

Hard to see the difference, but the holes are now nominally 7/8″ diameter. 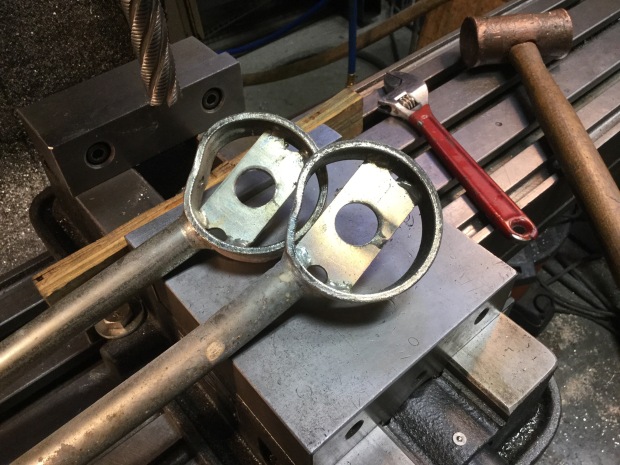 Ok, now the bushings. I had a small bit of bronze (or maybe it’s brass) salvaged marine shafting. I had fooled around making flutes on it with the index head. I was learning, wasn’t a great job, had the head offset so the grooves were asymmetric, blah, blah. But there was enough of the stuff to work with.

And alongside is the little shaft that will replace the worn end of the cross bar. I reamed the ID of the bushing to 16mm, turned the shaft slightly undersized ( about 15.95mm). The OD of the bushing was left untouched on one end, the other turned down to a press fit for the 7/8″ hole that I milled in that flat bar.

Notice one end of the little shaft has a flat milled on it and a cross hole drilled? That end will fit into the cross bar with the hole lining up with the existing cross bar hole.

I cut off the worn end of the cross bar and milled back square. Still using the 7/8″ roughing end mill. Oh how I love that tool.

So, and excuse the initial so, so I pressed in the bronze bushings. One pressed home with that satisfying grunt that makes one smile, the other… Meh. Combination of pressing into only 1/8″ thick material and the hole not being fully round ( remember I mentioned one hole didn’t fully catch the mill?). I didn’t want the bushing to be able to rotate in the hole, it would then wear away just like the original bar. The answer? 1/8″ roll pin. Holds the bushing nicely in place.

Beside it is the little stainless shaft that is pushed into the end of the cross bar. 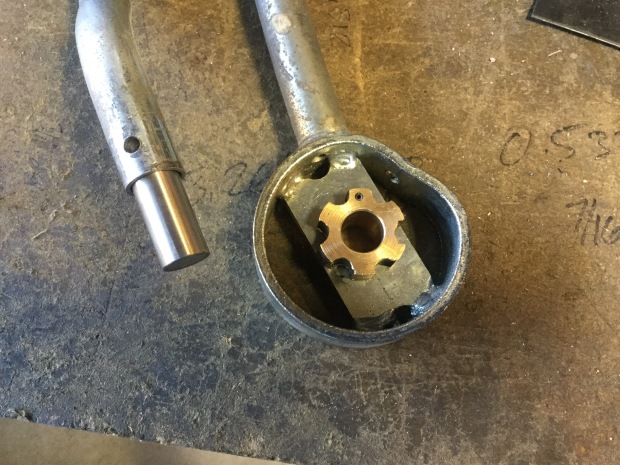 Lubed the shaft up a little with some light oil and put everything back together. The M5 machine screws on the cross bar locates the stainless shaft, it doesn’t move.

Picture taking to forgotten during reassembly, all I can show you is the end of the hinge where you can see the stainless shaft and a hint of the bushing.

But trust me, the hinge action is now nice and smooth. Sometime soon I will install it and see if it lives up to the hype. And, I’ll have a look at the one currently installed in the van with an eye on making some sort of easy DIY kit or procedure.

This entry was posted on July 23, 2016, 11:30 am and is filed under vanagon, vanagon mods. You can follow any responses to this entry through RSS 2.0. You can leave a response, or trackback from your own site.