What am I doing screwing around with another project when I have a couple of unfinished ones on my plate? Well it’s just that yesterday’s propshaft protection plate build got me all hot and bothered to add at least one extension to the side. To the right hand side of the propshaft, between the skid rail and the frame rail, the coolant lines, the heater lines, and most importantly the shift linkage are exposed. You all know, but I’ll repeat, the shift linkage is protected by a tube on 16″ syncros, regular syncros with the bad road package, and ’91 (maybe ’90 too?) syncros in North America at least. The tube protects a couple of the joints in the linkage and I think that is a very good thing. In the winter I have had slush and ice build up on the linkage such that the van becomes hard to shift. Rather than try and reproduce the stock protection tube I thought that a plate over that entire section would be the ticket.

I cut them up. 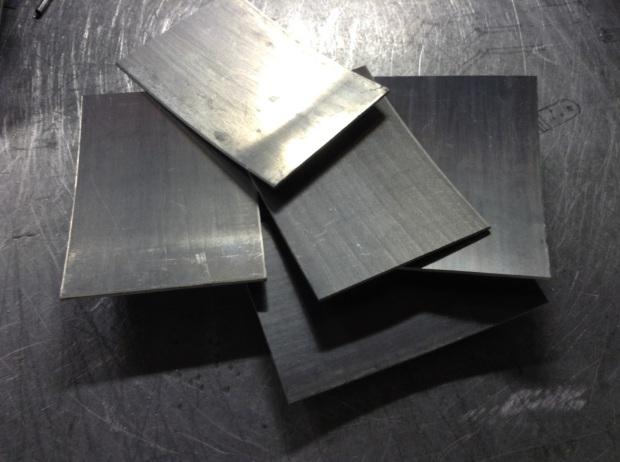 Then tacked them together. I welded a length of 1/4″ X 2″ 6061 along one side, welded out full on the concave side, then back gouged the convex side. 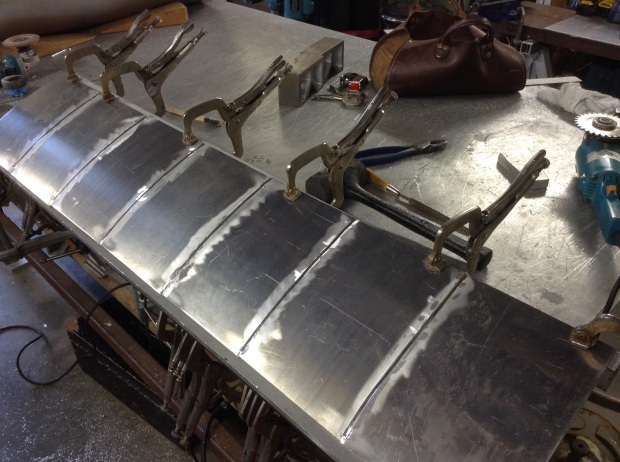 Welded out those grooves and ground the welds flush. The welded up assembly, and no points for guessing this, did take a curve. I laid a little beatin’ on it but accepted the wow. I think I can make it work for me and pull it out somewhat in the install. Is that my thumb in shot? I was using the iPad to take the pics, left my point and shoot camera at home.

Clamped it in place on the van, to see what’s what. BTW, my welding was shit today. I had a lot of oxides bubbling up, never did get in my groove. Maybe it was the old stock I was using or maybe I was not on the ball.

The outboard edge will sit a little higher on the frame rail, I just couldn’t clamp it that way. You know, the curves in the beast makes it stiffer than you’d expect. Now I have to make a few tabs to mount the inside edge to the propshaft protection plate, and I’ll bolt the outside vertical section to the frame rail (there are holes already in the frame that I can use).

Posted by albell in vanagon, vanagon mods on October 30, 2013

Things are never finished eh? I decided to cut down the length of the arm on the iPad mount (previous post about it here) and to glues some leather onto the mounting plate. Looks better I think, but it is still not finished, the cup washers I used are not large enough…

And yes, the heads of the machine screws are a bit awry. I’m not by any means OCD, but those screw heads really bug me. 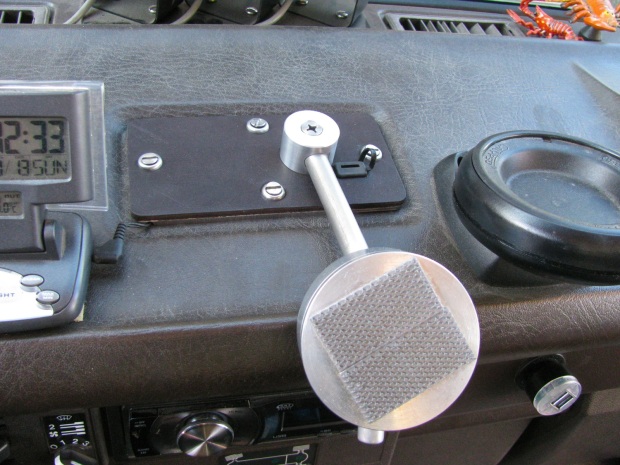 I swear, yes swear, that the connector looked fine when I pulled the engine for the head job at the beginning of this summer. Yes, I knew it had no boot, but I am sure the wires did not look like this.

I had a spare connector, from an inline 4 Digifant engine, and I spliced it on. Butt connectors, dielectric grease, heat shrink, you know the drill. 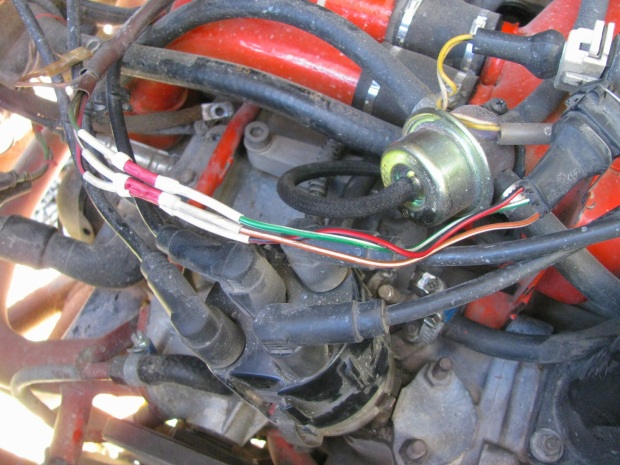 And to boot, the “new” connector has a boot!

File this under “D” for daft.

Once, after driving the van for a while on one of our summer trips, I had occasion (don’t ask) to feel the ignition coil. Crikey it was hot. Do coils normally run as hot as the dickens? Oh this can’t be good, something has to be done. Some action needs to be taken.

The result of this feverish worry.

It seems like an age since I have posted on the blog, I guess I’ve been in the doldrums. No major van projects completed, the bumper build has been on a bit of a hiatus as I don’t want to be doing the steel fabrication part (trailer hitch) at work when we are doing aluminum work. But i have to get back on that horse soon or else I never will. I have done a little  work on it however, I cut off the end caps and slimmed them down some. A trial fit of the originals showed that they were a bit clunky.

Even being in the doldrums, or maybe it was the horse latitudes, I have managed to do a couple of little things and this post is about something I did this afternoon. I had a bit of 3/16″ aluminum plate (5052 alloy) earmarked for propshaft protection. Oh I know what you are thinking, that’s not beefy enough is it? Perhaps not, if you want rock crawling type protection. But I’m just looking for something to protect the propshaft from flying sticks and stones and the occasional scrape over gravel.

I cut the plate to size (and by the way the two propshaft rails are not parallel, they taper in about 3/4″ towards the front) so that there would be a 3/4″ projection on each side of the stock skid rails. I want that projection so that I can attach (later) some more plate to enclose the space between the skid rails and the frame rails. I drilled 1/8″ pilot holes, 10 places, locations for machine screws to attach the plate to the skid rails.

Then I clamped the plate to the rails and drilled 1/8″ holes in the rails using the previously drilled holes as a guide. 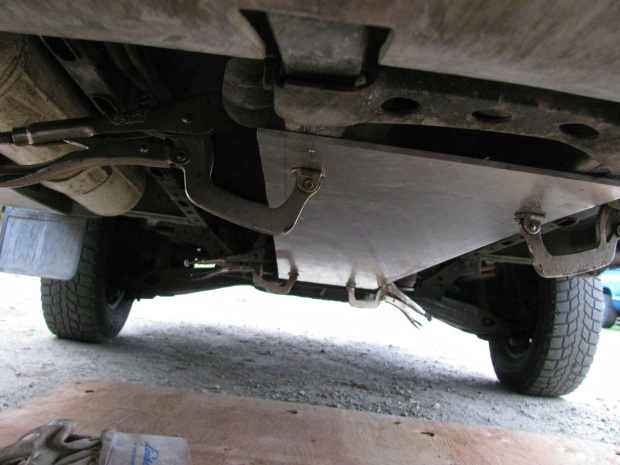 I removed the plate then enlarged the 1/8″ holes to accept threaded inserts. I bought this cheap insert tool at Princess Auto, back in the hazy days of summer. It came with a selection of inserts. I’m using the 10-24 inserts here. You screw the insert onto a threaded boss on the tool, insert the insert (!) into the hole and squeeze the handle. A couple of broken blood vessels later the insert is secured. Tool with insert in hole and an insert itself shown in this pic. 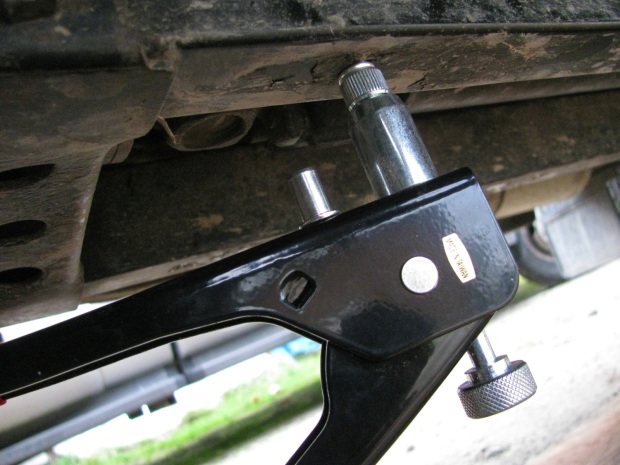 How it looks after insertion. 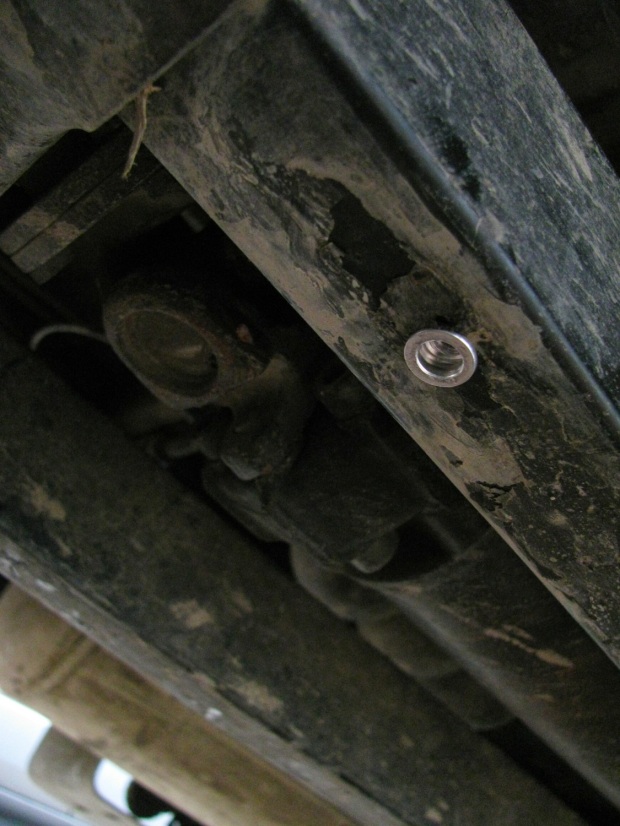 After a few more ruptured blood vessels all the inserts were installed. Oh I did spray some high zinc paint in the drilled holes before insertion of the inserts. Originally I had thought of counter sunk machine screws to attach the plate, but you know how it is with counter sunk screws, you have to get things perfectly aligned. I opted instead for these rather nice large (almost a truss head) headed stainless screws.

I have a notion to weld some braces on the back side of the plate just to beef it up a bit more. But then again I’m only using   1/4-20 screws to hold the darned thing on.

I’m happy with the result, and happy to be back blogging about the arcane things I do for fun.