Posted by albell in aircraft, around the airport on January 28, 2011

After my confusion last week identifying the  Alphajet, I’m a bit hesitant with this one… Eurocopter AS-350, right?  Not the twin engined AS-355. Its a pretty lame picture in any event, sorry. 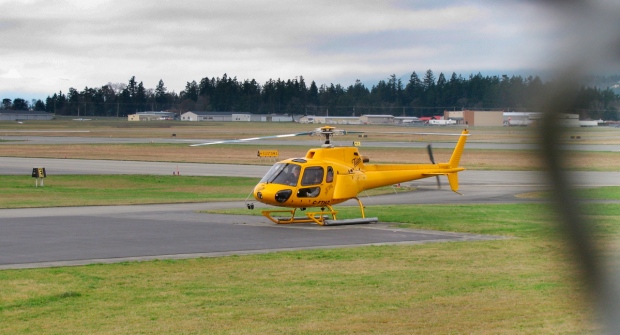 The window on the driver’s side door on my ’86 Syncro came adrift from the winder mechanism yesterday. I wasn’t really surprised, it had been a bit wonky ever since I got the van. Today I took the door panel off and set about repairing the window. I didn’t take pics of the disassembly, but I took a couple of pics of reassembly to make up.

First, a diagram of the scene:

The regulator comes out with a bit of a struggle, but once out I took it to the bench where it was obvious why the window mechanism had failed. The picture shows the broken part (on the left, parts placed together), plus a couple of spares from my ’82 van. Notice that this piece (as is the winder assembly) is “handed”, ie different for each side. 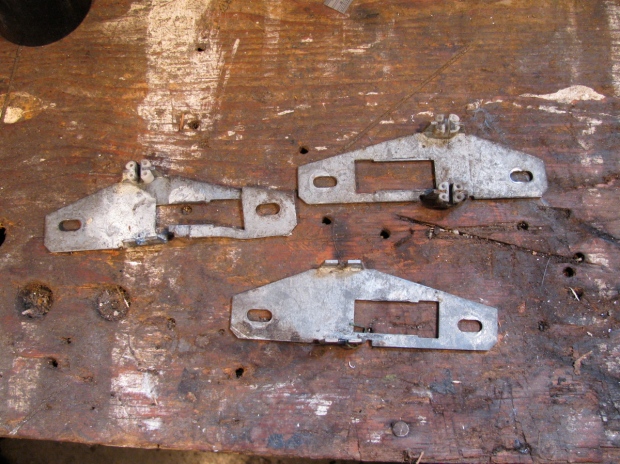 The replacement part, with plastic guides in place: 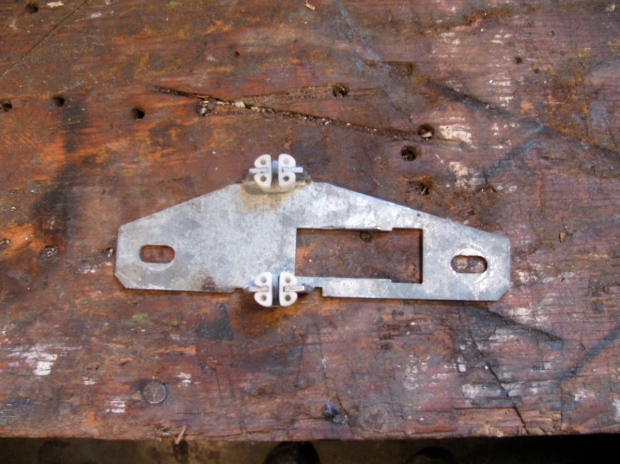 Another problem was a missing plastic guide that sits in that rectangular hole in the above part. The plastic bit is fixed to the moving part of the winder mechanism. So I set about getting a guide from my spare assembly:

Oops, I guess not:

But at least I have the plastic guide. Breaking the assembly showed that it is held together by 2 tabs on the “winding screw” projecting through the metal part, trapping the the plastic guide, and the tabs are peened over to secure. So he I go taking the same part off the regulator that I want to repair: 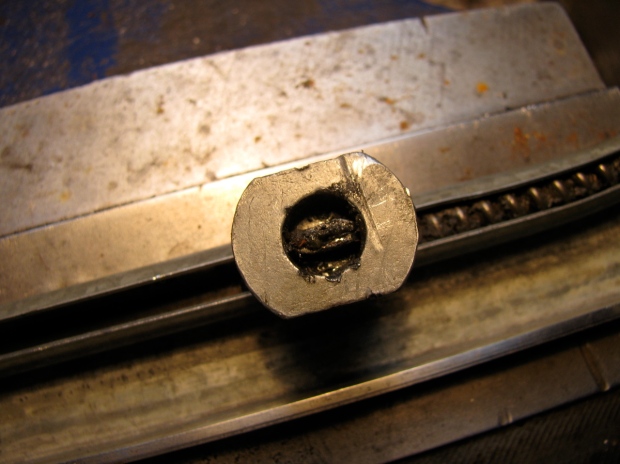 And the part freed: 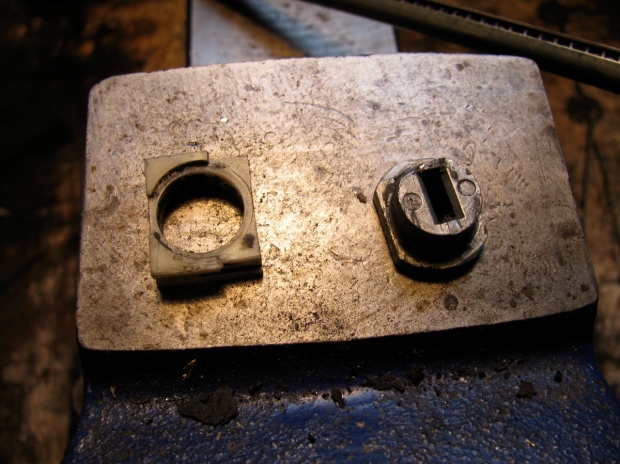 On and tabs spread: 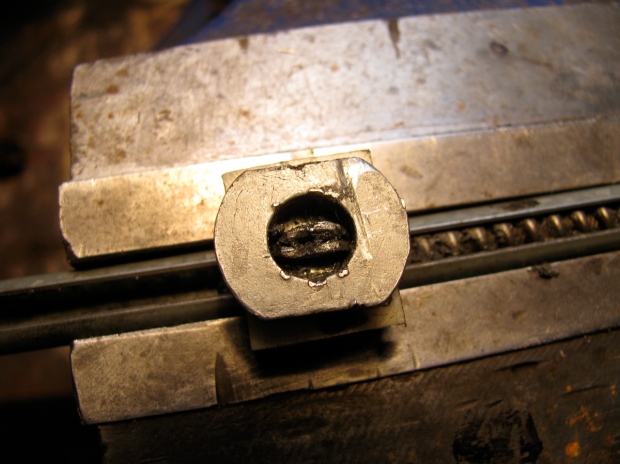 I guess I should mention that I cleaned the entire assembly and re-lubricated with grease. Now back out the van to re-install. I used a spring clamp to keep the window glass up and out of the way. Here is the assembly clamped on the face of the door to show the orientation:

Wiggling and tilting etc, it goes in: 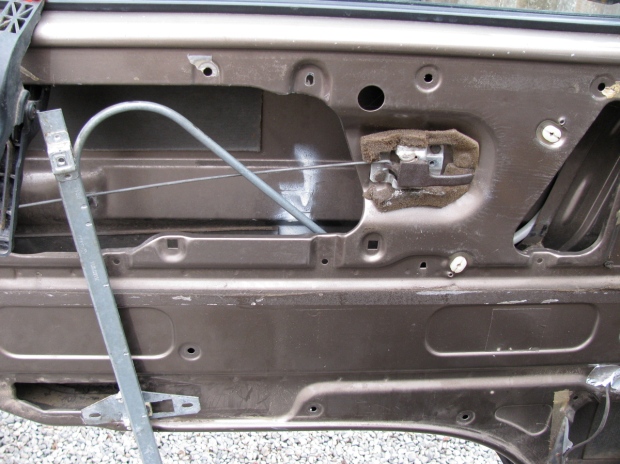 That vertical track is secured at the top, and at the bottom on bottom edge of door:

The plastic guide tube (which contains the “winding screw” when the window is wound down, is curved and secured by metal tab on door: 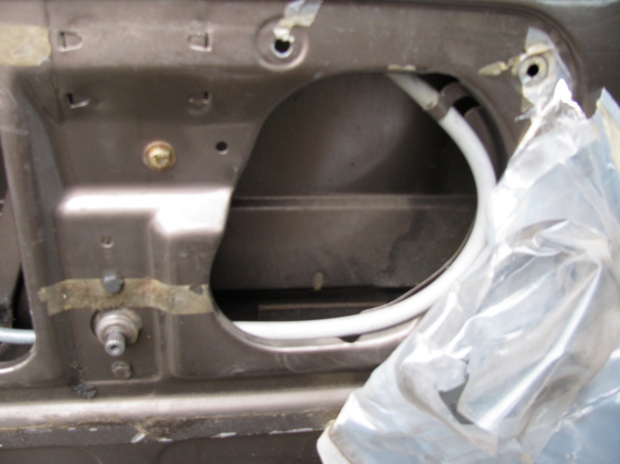 Bolting glass carrier to regulator. Don’t tighten bolts up until you wind window up and down a couple of times. Note the hole at top of door that allows access to forward bolt: 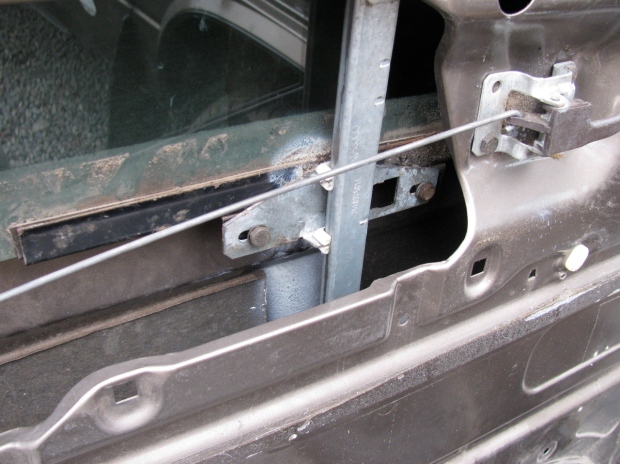 There is a little felt pad glued to the outer door skin, I suppose its to eliminate the window rattling at some part of its travel. I glued it back on with double sided tape: 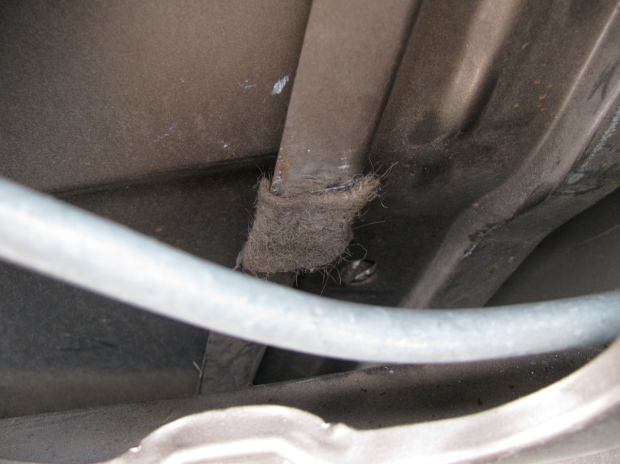 Posted by albell in aircraft, around the airport on January 21, 2011

What did I see the other day? Was it a pair of Hawks from CFB Cold Lake or were they Alpha Jets from Top Aces Incorporated?

Close up of what I saw: 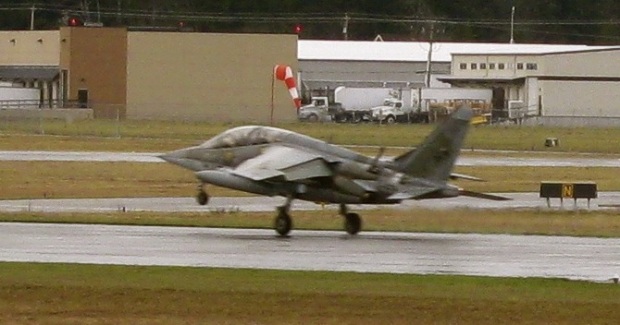 Wikipedia sourced image for the Hawk:

And Wikipedia sourced mage for the Alphjet:

Here is a pic of Top Aces Incorporated Alphajets

Posted by albell in vanagon, vanagon tech papers on January 21, 2011

Posted by albell in vanagon, vanagon tech papers on January 21, 2011

Probably like a lot of you Vanagon Westy owners, I have been powering my interior lights, radio, and cig. lighter from my auxiliary battery by running a (fused) wire up and into the bottom contact of the #3 fuse spot (fuse removed) on panel. This works ok, but its sort of a kludge. I looked at the wiring diagram and noticed that there is a spare connection on “E” multiprong connector, “E3”, that goes directly to the circuit that fuse #3 powers. I have a bunch of scavenged wire pigtails that have the molex-type connecter on one end. Connect one of those pigtails to the aux. battery wire, and pop the other end into “E3”. Fuse spot #3 is left without fuse as before. Diagrams below might help, crudely annotated diagram added. 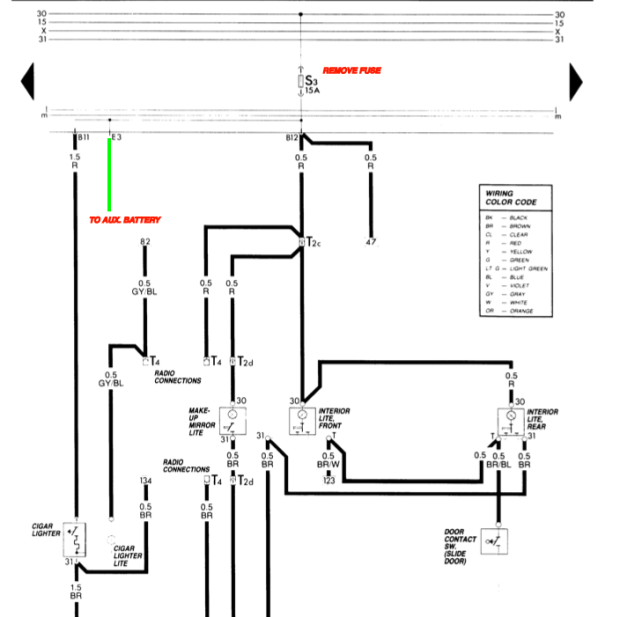 Posted by albell in aircraft, around the airport on January 19, 2011

Edit:  corrected myself, of course they are Alphajets. Apart from anything else, parking at the VIH building and not over at 443 sqdr. should have told me they were not Hawks from CFB Cold Lake, right?

Saw the pair landing yesterday just after I left the Aviation Museum. Driving past today I noticed them parked by the VIH buildings.

And about 30 minutes before take off today

Posted by albell in aircraft, around the airport on January 18, 2011 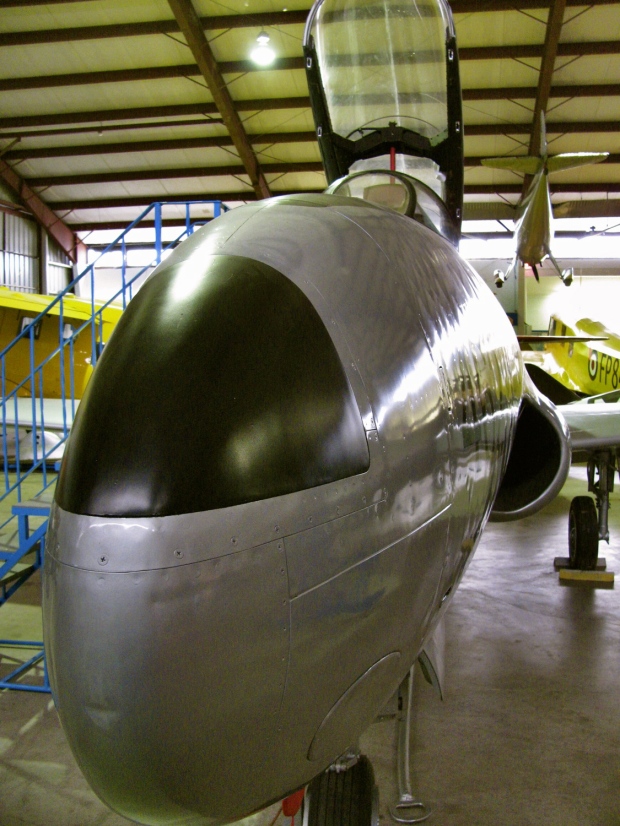 I spent 3 hrs at the BC Aviation Museum today. Its a fantastic place, full of incredible things. Low key and casual and what really makes it special are the volunteer guides who walk you through, offering information and personal stories of the planes and their experiences. I recommend a visit to anyone even faintly interested in aviation.

– Vickers Viscount being restored. The smell inside is so nostalgic, and note the size of the windows, the ashtray in seat and in washroom.

– Wright Cyclone 18 cyl. radial (that’s a quarter on the shaft and on piston)

Posted by albell in aircraft, around the airport on January 14, 2011

Some old snapshots taken way back in 2001(?) at the 443 Maritime Helicopter Squadron open house. 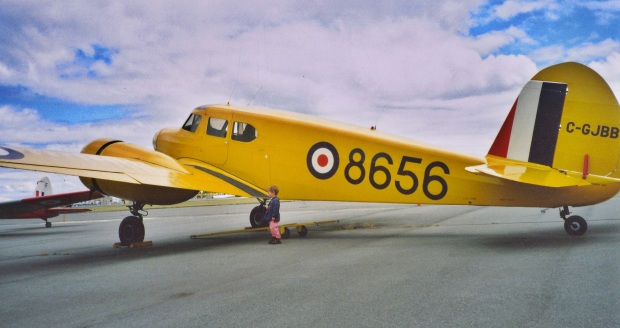 My minion attempting to steal a Tiger Moth

AAA – around another airport

Posted by albell in aircraft, around the airport on January 10, 2011

Phil Z. sent me these photos of float planes around Campbell River Spit Aerodrome. Beaver galore (no, not the Bond girl).

The twin Beech looks small in comparison to the Beaver, or is a trick of the lens?

Another shot by Phil of the twin Beech and Beaver, the size comparison perhaps makes more sense.

I”m just home from another overnight trip, with my son this time. I switched tires to the Nokian CS set and hoped to do a tire comparison, but the snow at spot where I had camped 2 nights before had softened and so i really could not honestly compare the tires with the Vredestein Winter Comtracs used before. We decided to move on, and we ended up camped on a pretty dismal part of Granite main logging road (I had got stuck just a little further up this road 2 days before).
Here is the google map ref link for the camp spot on road. The sort of sideways heart shaped logged logged area to the west of the green arrow (“campsite”) is where we skied to the next day.
google maps ref

On the way to that spot we had to drive past Port Renfrew . By the way, you might know Port Renfrew as the southern entry point to the west coast trail.

It looks almost tropical, not typical, in the first two pics. The eastward looking shot is where we were heading, not much snow visible. We went up “Granite Creek main”, not quite as far as where I got stuck previously and decided to camp overnight by the side of the road. Next day one of us decided to sleep in. Then on to slog along logging road to the heart shaped cut block seen on the google map ref. The snow was heavily covered in rime/hoarfrost, and the area was mostly second growth with a few reminders of the size of trees there before. Looking back to where the van is parked, near the base of that vague diagonal line at the left of the picture, then looking forward at the cut block… pretty close to a 45 degree angle, hard work cutting trees on that, eh? Then found some sun to have some chocolate and on back to the van. We headed home via Cowichan Lake, just as I did the trip before.

Posted by albell in Uncategorized on January 2, 2011

The stats helper monkeys at WordPress.com mulled over how this blog did in 2010, and here’s a high level summary of its overall blog health:

About 3 million people visit the Taj Mahal every year. This blog was viewed about 31,000 times in 2010. If it were the Taj Mahal, it would take about 4 days for that many people to see it.

The busiest day of the year was April 12th with 712 views. The most popular post that day was Weekend trip in April.

Where did they come from?

These are the posts and pages that got the most views in 2010.