For a few months now I’ve been using a Pioneer MHV-X560BT head unit in the van. It replaced a Pioneer DEH-P5000UB that had worked almost perfectly for 8 years. The older unit did develop a ground loop whine and I posted about that back in 2011, link here. But apart from that the unit worked well. It had USB input on back, and I led a dongle up thru the ashtray to connect to devices. Played CDs , various formats but I found myself using CDs less and less in the van.

The one thing that really bugged me about the old unit was its depth. With all the wiring coming out the back, including three pairs of RCA jacked cables, it barely fit into the dash. Fetched up hard against the heater box in back.

So back to the new unit, it has no CD player so it’s about half the depth of the old one and despite the inevitable rat’s nest of wires coming out of the back (again including three pairs of RCA jacked cables and an USB cable)  it fits delightfully easily into the van.

It has built in Bluetooth which pairs up quite quickly and consistently with my devices, external mike for hands free phone,  a remote control, wired USB input.

The controls are not bad but not great. I find them better than the old unit, especially for menu access and also for adjusting things when driving. Don’t get as many bump induced accidental choices.

Looking straight down thru ashtray hole. 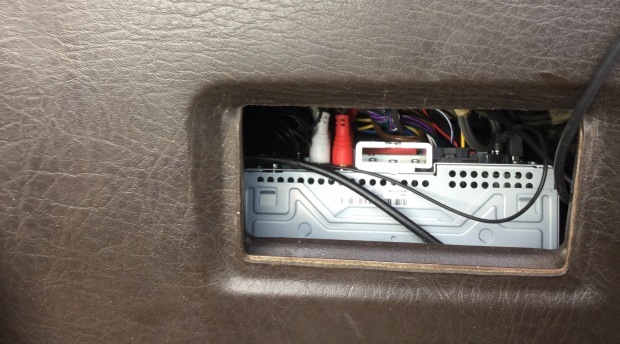 I stuck the mic here, not the best spot perhaps.

This entry was posted on July 17, 2016, 3:23 pm and is filed under vanagon, vanagon mods. You can follow any responses to this entry through RSS 2.0. You can leave a response, or trackback from your own site.