I’ve modified my led light set up in the van a little since last update here, one change was to move the strip above the sliding door to a higher position and to contain the strip in a channel and add a diffuser cover to it. And the other day I replaced the dimmer switches with what I think are much nicer units.

Got them from Banggood, link here. 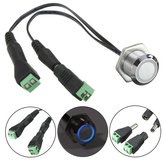 Annoyingly, I didn’t get the nut on the threaded shank shown in the the image. Looks to be a M20 x 1 thread. I managed to cobble up retainers to hold the switches in place.

Made an aluminum mounting plate and mounted that to rear most air vent. Switch action nice, light touch turns on or off, long hold dims or brightens. Blue glowing ring so you can see them in the dark. I tried measuring the current draw for the glowing light, I got 2.5 mA reading but the number crept up to 11 mA after a few seconds but then dropped back to 2.5 when I touched the switch. Must be something to do with the capacitance switch gubbins. The blue glow is not bright enough to be obnoxious.

They are made from plastic, chrome plated, but they seem to be good quality. They did come with the connectors as shown, the same type I had to buy separately for the old switches.

This entry was posted on June 12, 2016, 9:22 am and is filed under vanagon, vanagon mods. You can follow any responses to this entry through RSS 2.0. You can leave a response, or trackback from your own site.