The interior cabinetry in my van is pretty tired. Don’t forget it’s from my old 82 Westy, I swapped it all into my 86 tin top syncro when I converted it to a camper. One of the more distressed parts is the rear overhead shelf. The laminate is cracked and the entire span was sagging. Doesn’t help that I carry and axe and other heavyish stuff up there.

So I cut some 1/8″ thick aluminum plate, drilled holes for screws and milled larger ones to reduce a bit of the weight and give it some visual interest. I also drilled a hole to mount one of my new led dimmer switches ( same as the ones I showed in recent post). That switch replaces one that was mounted to the wall. It controls the strip of led lights attached underneath the shelf, right at the rear edge. You can see the edge of the aluminum U channel that the strip is mounted in right below the new support.

I’ve used Robertson head sheet metal screws to attach the plate. I hate Robertson headed fasteners, yes it’s irrational, but I hate how they look. I didn’t have anything else on hand, but I’m thinking I’ll replace them with oval head Phillips machine screws with nuts on the inside.

Should I paint it? I don’t know. Maybe just some more rubbing with maroon scotchbrite and some wax. 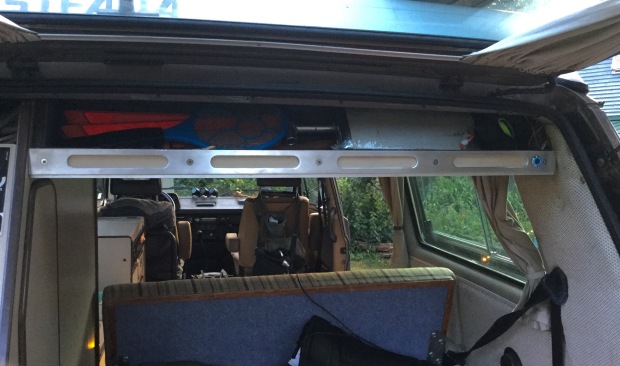 This entry was posted on June 16, 2016, 9:13 pm and is filed under vanagon, vanagon mods. You can follow any responses to this entry through RSS 2.0. You can leave a response, or trackback from your own site.