Some background, I have two relays in the headlight system. One for the high beam one for the low beam. Here is the rough schematic of how I wired things 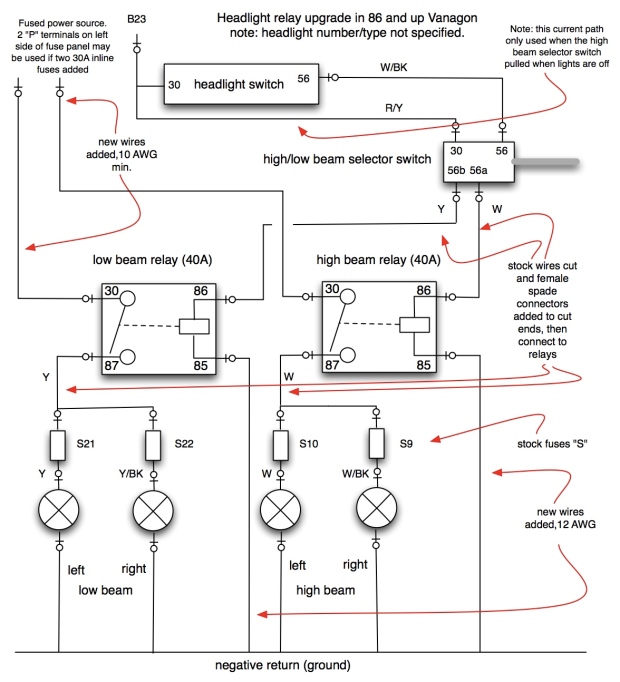 So out of the low beam relay on terminal 87, the current then continues on and back into the fuse panel, pin 21 in the A connector block. 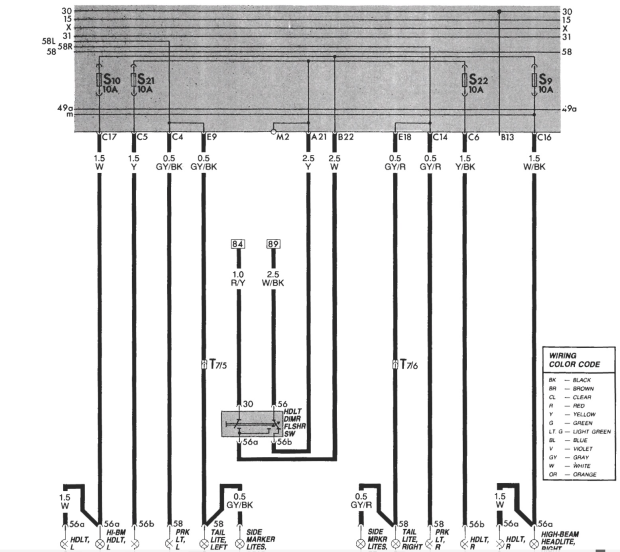 See A21? Turned out this connection was the culprit. Was burned and melted. So much so that I couldn’t get the terminal out of the block to replace. What happened to cause this? I’m thinking it’s was one of those positive feedback things starting with a slightly iffy connection, a little resistance making heat which causes more resistance then more heat etc etc. Ending finally in no continuity. Could I have been over loading the connection with 80W lowbeams? The combined current draw for two 80w lamps would be around 12 amps ( at 13.5 bolts) so I’m not really convinced the terminal couldn’t take that. Edit: sounds like I’m trying to convince myself doesn’t it? Maybe it is too much current for the pin, however the  pin carrying the high beam current shows no damage at all, albeit the high beams would be in use less than the low beams. This might all be moot as I have a lower current draw lighting solution that I hope will pan out.

As I couldn’t get the terminal out of the plastic block I cut the wire ( that wire runs directly to the low beam relay) and used the really handy M terminal right close by. The M2 terminal is common to A21, you can see that on the stock wiring diagram above.

Hers the nasty connector ( I tore the plastic clip of the near side) and you see the yellow “jumper wire” to the M2 terminal. It has a bit of black heat shrink on it to give the wire a bit of stiffness, strain relief of a fashion, for the spade terminal.

I really hate working on the back of the fuse panel. And getting the plastic terminal blocks out is a bear. And I always seem to knock some other connection loose with all the tugging and twisting involved in getting the connectors out.

This entry was posted on December 3, 2016, 4:59 pm and is filed under vanagon, vanagon mods. You can follow any responses to this entry through RSS 2.0. You can skip to the end and leave a response. Pinging is currently not allowed.