I mentioned before that Simon had installed his heater inside his between seats console. I was planning to do the same but I got sidetracked by another idea. I needed a box to enclose the heater, a barrier between the heater and the console. Once again the scraps of aluminum honeycomb material I got from Donovan at Western Edison popped up. I wanted a box that wild be stiff enough to take someone standing on it and the honeycomb was the obvious choice for stiff and light.

Here it is, just butt joints all round with a fillet of PL Premium polyurethane adhesive holding it all together. Some of the exposed honeycomb I filled with bondo. I scuff sanded it all over. 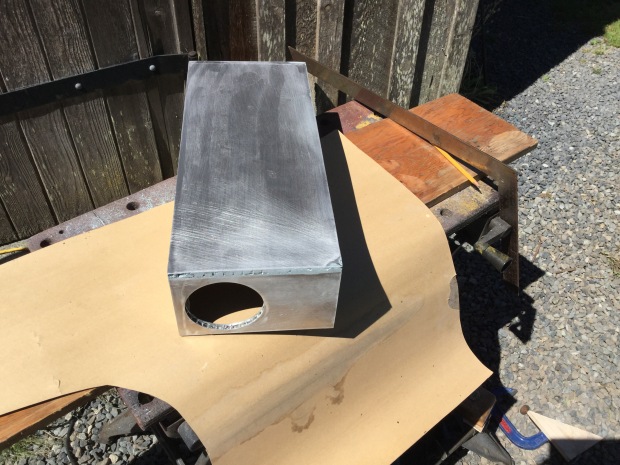 And then I must have had a mini stroke as I decided to try sticking on some old veneer I have had hanging around for years.

This is the first time I’ve tried veneering anything. Back in the day when I did woodworking as a hobby I was fully into oldtool, split, hew, and plane type of work. Thought that veneer was somehow dishonest. Oh the arrogance of youth.

The bit of veneer I had was not large enough to be able to match grain direction so it turned out to be a bit of a dog’s breakfast. And the corners and edges were not perfect. I hit the corners with sandpaper enough to let a thin line of aluminum show. 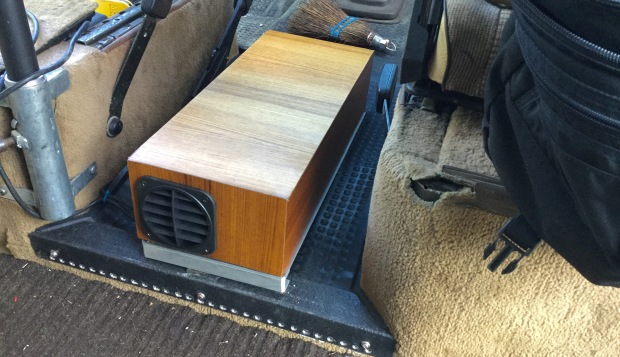 I attached a rare earth magnet to the inside of the box and that really helps to hold the box in place as it grips the heater. Heating air intake is drawn from through the mounting plate and in from the gaps at the rear most part of the plate. The floor slopes away so it turns out that the gap is pretty well equal to the air intake opening.

I could just use the heater as is, but then I would loose the console storage. So I decided to cover up my lovely creation (!) with the console. I took it apart and cut sections out of the cubbies, welded ( hot air and a screwdriver , yeah nasty) the cubby bases back in. Now the console fits down over the box, albeit with less cubby storage room. 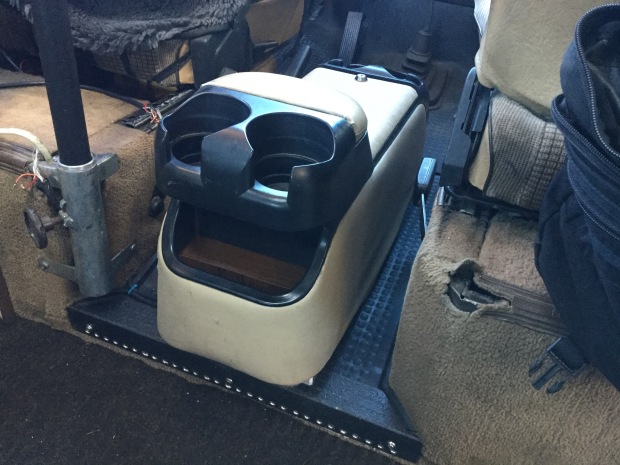 No, the hot air ain’t going to come up out of that opening. I’ll cut out the rear end of the console.

Oh, almost forgot about how the heater combustion air intake and exhaust lines are routed. It’s a bit of a pain to connect them up over the front diff, but the intake comes back down and is secured to frame rail near propane tank.

Hey you see the un-secured gear clamp on the black intake line? When I took the pic I hadn’t got that bugger forward and up into place. 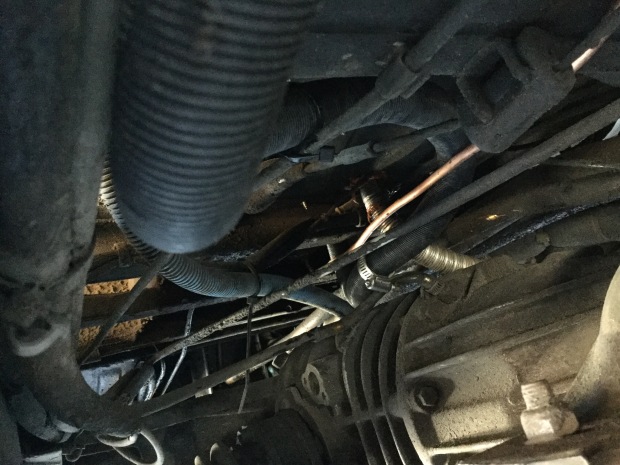 And the exhaust line comes back down on the passenger side to end up at the forward edge of my lateral skid plate.

I’m finishing up the thermostat mounting and wiring, and doing the console rear end mod. That’s for the next post.

This entry was posted on June 27, 2016, 5:59 pm and is filed under vanagon, vanagon mods. You can follow any responses to this entry through RSS 2.0. You can leave a response, or trackback from your own site.