A while back I made some artificial rain gutter things to quickly get some roof racks on the van so I could carry my son’s kayaks. They worked even if they were ugly. But then this year I found a good deal on an old school Thule ski box.  I think it is a Combibox 250, you know the kind, seemed to be on every Volvo station wagon around here during the ’80’s.

I took some 1/4″ thick, 2″ deep 6061 aluminum flat and drilled some holes in it (for looks mostly). The rear end of the strip attaches to the top two bolts of the pop top hinge. Up front I screwed up and drilled holes in the centre line of the strip which did not line up with the holes in thhe pop top that I drilled for the old bracket.

So I drilled a bit of 1/2″ aluminum plate, and pressed in some nuts (M6). The plates then screw into the old holes and the pressed in nuts take bolts from the strip. I beveled the lower edge of the strip to fit the hooked arm of the roof rack. The strip got some rattle can bedliner as a finish.

I have some spacer blocks to go between the front end of the strip and the pop top. Just to prevent branches from snagging. But i ran out of double sided tape so they are not installed yet.

Well it works, no points for aesthetics, but it works.

Now I need to make a ladder to access the damn box! 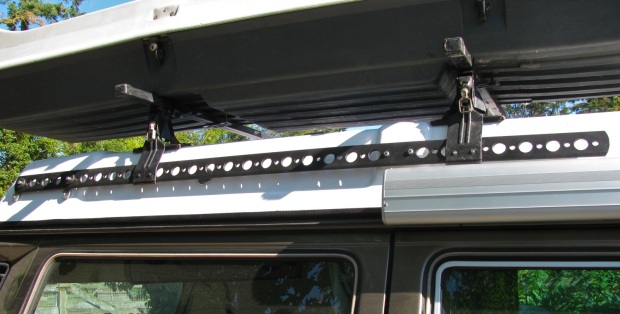 This entry was posted on July 27, 2013, 7:13 pm and is filed under syncro, vanagon, vanagon mods. You can follow any responses to this entry through RSS 2.0. You can leave a response, or trackback from your own site.