The other thing I did recently was swap in a pair of front springs from my old ’82 westy into the front of my ’86 syncro. You know that that suspension set up is different between the 2wd and syncro vanagons, the syncro has a spring perch on the shock absorber and uses (generally) shorter springs than the 2wd vans. I compared the spring lengths of the ’82 diesel westy and my ’86 syncro in this blog post, and in this post. This particular 2wd spring is about 20 mm longer than the syncro spring, but the wire diameter (approx 16.6 mm) and number of turns (8) are the same. The spring rate, if I have identified the 2wd spring correctly, is according to the IG16 wiki 80 N/mm. It is the same spring rate as the syncro springs I have. It seems only one spring type was installed in North American market syncro tintops and westies.

I’ve not been pleased with the amount of  “springing” in the van. With the westy conversion it must be a bit heavier than it was as a tintop, and I find that the van scrapes the spare tire clamshell on the ground when I’m negotiating ditches, trenches etc on logging roads. Friend Simon would add that my excessive bulk is not helping things. The distance between the front fender lip and the wheel centre was about 18.25″. I would like it to be at least 19″, but not more than 19.5″. At the back it is trivial to add some shims to raise things, and I did do that (rear measurement 19″). That shimming made the front end look even lower.

Originally thought that I would add a shim to the top of the spring, but then I decided to give the spring swap a go. I did not know whether the “no compressor spring removal” technique would work with longer springs so I bought a rather cheap spring compressor from Princess Auto. Spring compressors give me the willies, I feel like I am on a bomb disposal mission when I use them.

Upper A-arm disconnected from upper ball joint, you’d think there is enough room to get the compressors in.

Nope, not enough compression with this set up. 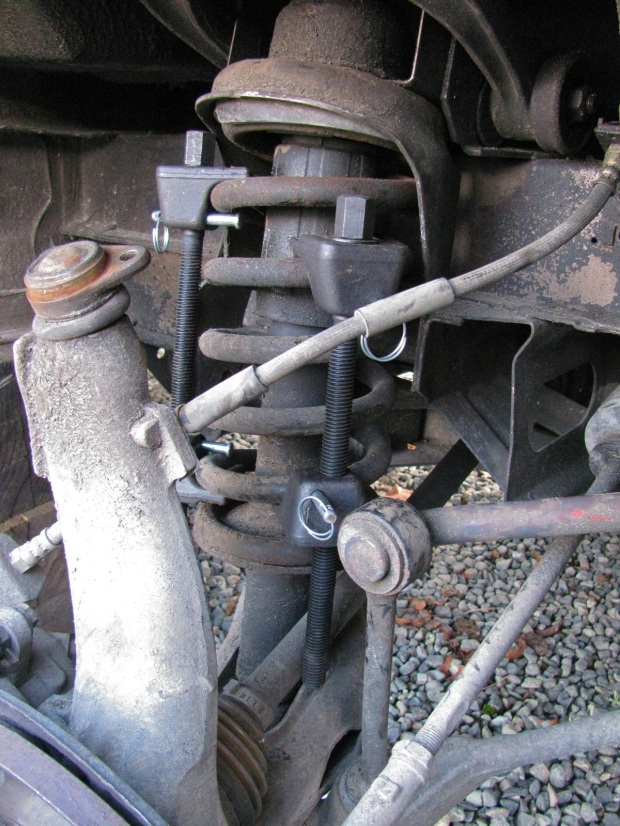 Ditto here. The hex area at top of compressor does not allow you to get a grab on a higher coil, plus at the other end, the screws are too long and interfere with the axle shaft. I wasted about an hour mucking around with the compressors, I finally gave up. I could have cut the screws down, but I was of two minds about that. Was it worth wasting more time trying to get them to work or try and return them to the store?

So I went back to the no compressor method. Radius arm arm was removed, sway bar drop link disconnected, nut and rubber bushing removed from top of shock, and the lower control arm carefully lowered so that the spring and shock could be pulled out to the side and the spring removed. One thing though, I had installed a westy swivel seat base on the passenger side this summer. So I had to make a hole in the base to access the plug that, once removed,  allows you to put insert a tool to guide the shock back up into the shock tower during re-install.

So, I got the passenger side spring installed (radius arm bushings on that side done too) on New Year’s day. With one spring installed, and before driving to settle things in, I got a 19.5″ measurement from hub centre to fender lip. I like that look, it is as high as I want to, or should go. A couple of days later I got the other side done and the hub to fender height settled in at 19 1/8″. Driving the van felt a little different, I could tell the front was higher (yes, I really could detect the change), there was no difference in how the van dipped or raised over bumps. Mind you this was only driving over the lumpy roads in North Saanich, no logging road travel done yet.

New bushings and radius arm. Note the shiny spacer I made over a year ago.

“By Timothy, what a difference”

Well I think the spring swap was worth the effort but I will add a teeny tiny little spacer (about 1/4″ thick) to bring it up to 19.5″ hub to fender lip measurement. As to the radius arm bushings, I don’t think any further comments are needed.

This entry was posted on January 6, 2013, 8:25 pm and is filed under syncro specific repairs, vanagon, vanagon mods. You can follow any responses to this entry through RSS 2.0. You can leave a response, or trackback from your own site.