I only had a little time to do any Vanagon stuff over the break, a couple of things were dealt with, I’ll post it up over the next couple of days.

First up is my auxiliary battery install. It has been working fine for the last couple of years, but recently I have noticed (with the help of the Doc Wattson, blog post here) a couple of disturbing things. First one is, and I have not figured this out, is a peak amp reading of 20 – 30 Amps. I never see it happening, even with mucking around with stereo settings while I look at meter. And I don’t have a circuit in my aux. battery set up with a fuse larger than 20 A. I do suspect the stereo amplifier, but it must be a very brief transient spike in current draw.

The second thing is a chronically undercharged aux battery. I suspected, and suspicions confirmed by the Doc Wattson, that the Blue Seas ACR (a now discontinued model, CL series BatteryLink, p/n 7600) I  use to switch between the main/starting battery and the aux battery was not combining the batteries when it should have been. The ACR ( automatic charging relay) does have indicator lights on it, but the unit lives under the driver’s seat.

The ACR has provision for wiring in a remote located LED that lights up when the ACR combines both batteries. So I set about adding that and at the same time I would go over connections and ACR settings. I suppose a picture to give you the lay of the land would be a good idea. I admit, it is a bit of a dog’s breakfast. Working around clockwise the stereo amp is on upper left (old Alphasonik that came with van), then auxiliary fuse panel, to the right and up is the Doc Wattson meter, below that is the 31 A/hr AGM auxiliary battery, Schumacher trickle charger, then finally the Blue Seas ACR. 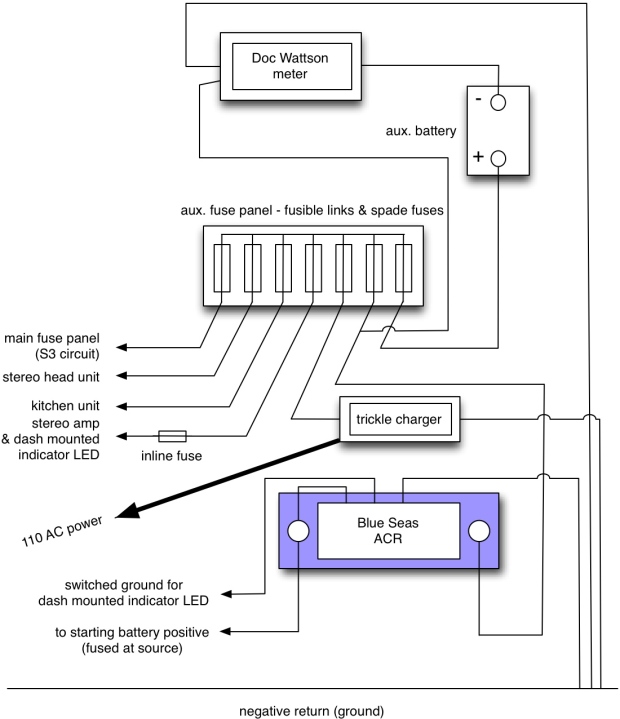 Edit: link to how I connected to main fuse panel S3 circuit from aux. fuse panel.

Under the cover of the auxiliary fuse panel. Its is from an early 2000’s Golf/New Beetle and was installed right by the battery. Useful little thing, I’ve had this one for about 11 years (used it on my old ’82 westy).

Ok, back to the ACR trouble shooting. I ran a pair of wires up to the dash, and mounted a blue LED indicator light in a rather temporary way under the lip of the dash. The light is from Princess Auto, made to fit a 1/2″ hole and has resistor built in, much easier to buy than to fiddle around making one up – ha, I must be getting old. Disregard switch and knob to the left of the light, has nothing to do with this job.

Testing connections, oh, brighter than I imagined. Looks like it is going to provide some mood lighting.

Ok, so I have the indicator light installed which will let me know when the ACR has combined the starting and the auxiliary batteries, and I have gone over wiring connections and ACR settings. First time I drove the van all went well, the LED came on after about a minute (this is as it should). The second time I drove the van the light did not come on, the ACR did not combine the batteries. What is going on? I moved the driver’s seat and looked at the ACR – well blow me down – the over voltage light  was on.

I should explain, the ACR has 2 user adjustable settings. One is the voltage at which the batteries combine or un-combine. I have it set at 12.5 V and that means when the ACR senses that the voltage on the main (starting) battery drops below 12.5 V it will un-combine the batteries. And when the voltage measured on the main battery is above 12.5 V, than the batteries are combined (there is a time delay built in to weed out voltage spikes).

The second user adjustable parameter is the over voltage setting. The manual states:

“The OVERVOLTAGE potentiometer is used to adjust the voltage at which the CL-Series BatteryLinkTM ACR switch opens in response to high voltage. This is a protection feature when one battery needs to be charged at a lower voltage than the other. It also protects the second battery bank in the event of an overvoltage condition produced by the alternator.”

The van is still running and I glance over at the Doc Wattson meter and notice that it reads 14.94 V. So that’s it, the ACR has un-combined  the batteries  because of a too-high alternator voltage. I had the over voltage set to 14.85 V, and that seemed fine as I had adjusted my alternator to 14.5 V (yes, I have an adjustable reg. on the alternator), but now the alternator was putting out 14.94 V. It is strange, I didn’t see that high a voltage any time before.

I re-adjusted the voltage reg back down to 14.5, and the over voltage light went off and the batteries were combined.

Edit: Dennis H. advised me to re-adjust the voltage reg down to a max of 14.2 V. I think I will follow his advice.

So was this the ironic reason my aux battery was being undercharged – alternator voltage too high? I have to admit that I’m not 100% confident in the adjustable volt reg. I put in the alternator. I had one flake out on me on my old ’82, and now this one might be showing signs of “wear”

Finally (thank god, what a long winded and dull post), I still have that old Halon fire extinguisher I had in the ’82.

This entry was posted on January 6, 2013, 9:53 am and is filed under syncro, vanagon, vanagon mods. You can follow any responses to this entry through RSS 2.0. You can leave a response, or trackback from your own site.