Past couple of days has been one step forward, two steps back. First problem was when I glued on some 1/4″ closed cell foam to the backside of the front headliner (for a bit of sound and thermal insulation) and then discovering that doing that had changed the arc that the panel springs into when installed. The result was slight bit of wavyness at the rear edge of the headliner, and a tiny bit at the front. I could have planed off a smidgen from each side of the panel but I’ve decided to see how it works out once all the screws are in place – the rear screws are in and that has helped, the front screws that also hold on the front window curtain are yet to to be installed. I wired in a passenger side light, tapping power and grounds from the driver’s side unit. The rear edge of the headliner was exposed and lay below the aluminum channel that I had screwed in place on the front edge of the cut out hole. I couldn’t find a satisfactory way of finishing that edge so I decided to make a new aluminum piece out of aluminum angle instead of channel. I should have done this from the start, the vertical leg of the angle mimics the turned down edge in the stock westy. Bending the angle was not as easy as the smaller (and thinner) channel, and the end result shows some dents from the bending jig. Here are some shots during test fittings.

Still have to marry it to the corners

The slider door valence is secured by the hidden angled brackets, but still need to be screwed down on the aluminum angle and to the roof at the very front. I’ve not done that yet as I am still not sure about how to hide the exposed roof edge at the front corner.

Here is a shot of the mid to rear part of that valence in the van. Obvious that I haven’t got the rear headliner installed yet. 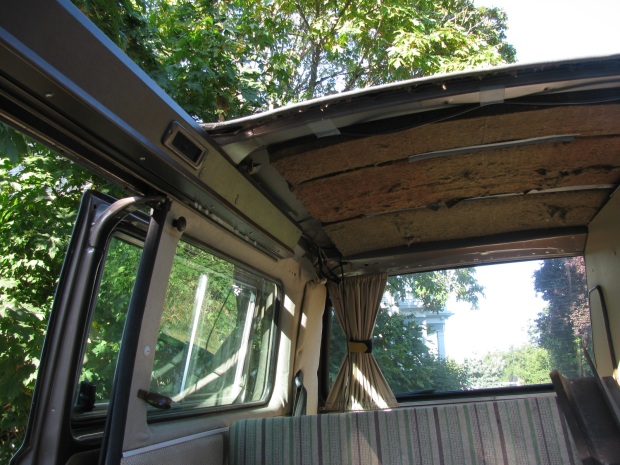 This entry was posted on July 29, 2011, 7:20 pm and is filed under vanagon, vanagon mods. You can follow any responses to this entry through RSS 2.0. You can leave a response, or trackback from your own site.