Trying various ways to trim, and somewhat strengthen, the edges of the sheet metal roof exposed by the pop top hole. Along each side there has to be a ledge to support both the bed and the pop top lifting assembly. At the front edge, you have to install the pop top latch (and support it) as well as merging the wooden headliner to the cut edge. At the rear edge, not much has to be done, just cover that metal edge. I’ll begin with the front edge. I decided to use some aluminum, U-shaped, to span that edge. I bent it to match the roof curve with a very rudimentary jig in the vice. Here it is practicing on a scrap bit. You squeeze a bit then move on a little, etc.

Of course I practiced with the U channel in the wrong orientation then proceeded to do the real bit the same way. Grr, had to straighten it out and re-do. But I got it done, drilled holes for some stainless sheet metal screws and a cut out around the latch. The plywood headliner comes to the rear edge of this channel, and I think will be gussied up with some edge moulding stuff, or something.

The latch has a backing plate, but whereas in the stock westy roof that backing plate lies in an area supported on one side by the crossmember flange, and on the other side by the turned down hole edge, on my van I don’t have the turned down edge and the crossmember flange is spaced away from the roof by about 1/4″. So I installed a 1/4″ thick bit of aluminum, the same shape as the backing plate, in that space. I didn’t take a picture of that but here is a shot of the backing plate (you can see the gap between the roof and the crossmember flange here). Well you can see a bit of that spacer in the pic below, and I should mention that the holes drilled through the roof are elongated side to side for latch adjustment. The latch plate itself has holes elongated front to rear.

You can see that with that intermediate plate the bolts just barely come through the backing plate.
Now some trial fits with the kitchen trough and the door valence. Door valence first.

See how I have to come up with some sort of trim and support for the corner? Same sort of thing with the trough (trough end cap is not in place).

Now onto the sides, I had to form a bit of aluminum angle to bridge the space between the box section and the roof. It was “just” a case of some cold forging.

Bending the angle to less than 90 degrees stretched the metal where I hammered, so the piece came out slightly curved. No big deal, it will pull back into shape when installed. I had to form a little hump to conform to the roof moulding.

Then clamped into place for trial fit. 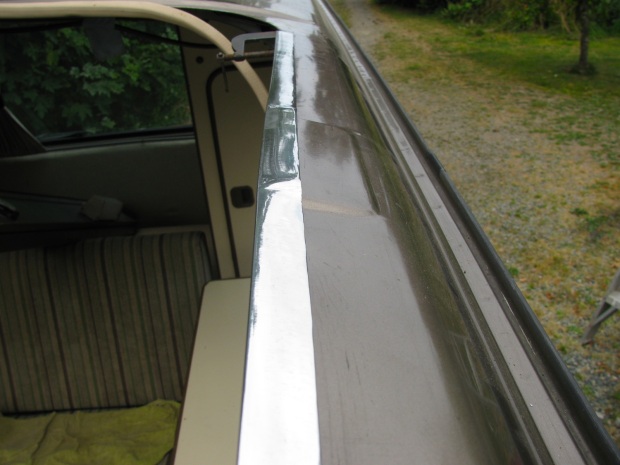 The crudely shaped portion over the roof moulding.

This entry was posted on July 26, 2011, 7:25 pm and is filed under vanagon, vanagon mods. You can follow any responses to this entry through RSS 2.0. You can leave a response, or trackback from your own site.