After refurbishing the pedal assembly I had to bleed the brakes. The rears went ok, but I broke the bleeder nipples from both front calipers. I swear I didn’t wrench hard, was a short wrench and the buggers sheared of easily. Here is pic of the front right, stub of bleeder gnarled a bit as I had a go with vice grips.

I tried spiral type bolt extractor but no luck. I then started to drill, carefully, not full diameter which is 7 mm, and not full depth. I was worried about damaging threads and also the conical base of the hole that forms the seal with the conical point of the bleeder. I then hit it with lots of heat, hoping the shell of the bleeder would separate from the body. No such luck and I got more frustrated and drilled wider and deeper. 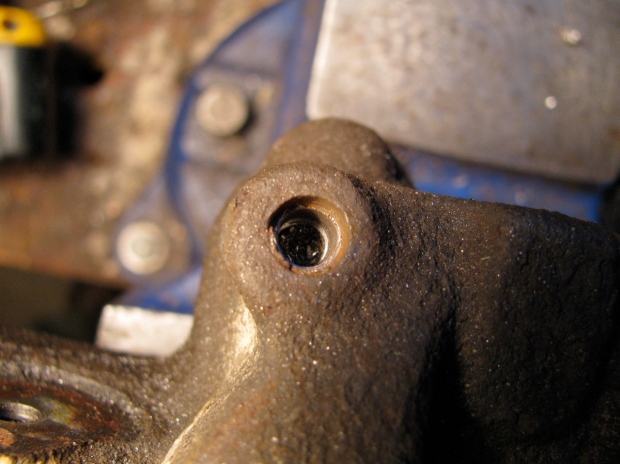 I ran a tap down the hole and managed to get some threads restored, but in the end I drilled out too deep and damaged the conical seat at the base of the hole and a new bleeder screw would not seal. Double bugger. Tomorrow I am off to the local wreckers to get a couple of used calipers. What a pain.

This entry was posted on February 3, 2011, 3:09 pm and is filed under syncro, vanagon. You can follow any responses to this entry through RSS 2.0. You can leave a response, or trackback from your own site.