The design team responsible for the fuel supply system in the Vanagon Syncro was led by a descendant of Leopold von Sacher-Masoch. No? Well how do you explain the location of the fuel filter then?

In camperizing the syncro I came upon the problem of screwing down the folding bed/rear bench brackets to the rear deck. I mentioned in a previous post how I drilled and tapped holes, but the rear deck is not thick enough to get more than one complete thread in it, so I went about making some little backing plates to build it up. On the passenger side it is no problem, the area is in the wheel well. But on the drivers side you have to reach up in wheel well, past the carbon filter and behind/above the gas tank. While doing that I decided to change the fuel filter which is located in that region.

Actually the fuel filter is attached to the inboard side of the spring tower. But you wouldn’t know it from this diagram (its #25, oh and the charcoal filter which is part of the emission control system is not shown here). 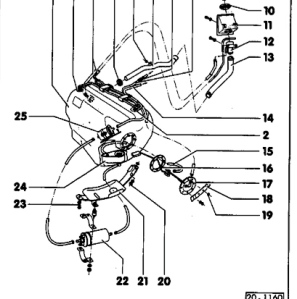 I did not take an “establishing shot” type pic, but here is a close up of the front side of the spring tower and the charcoal canister (I had removed the gear clamp that holds the canister to its bracket, which in turn is screwed to spring tower). 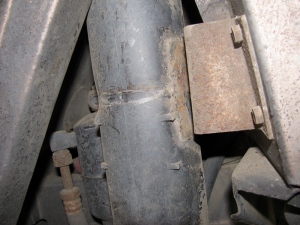 With the canister moved out the way a bit, you can see the filter, inlet end.

And if you peer around the rear of the spring tower, you can see the filter outlet end.

See that screw end sticking out? its one of two 10 mm hex headed screws that holds the filter bracket to the spring tower. I took both out, the “other one” near the front side of the tower is a bit awkward to get at, but I was lucky in that they were not rusted in. By the way, I did squirt all the fasteners with some rust busting stuff before starting. Hello bracket end!

I clamped the inlet and outlet fuel lines at this point too. I could get at the gear clamp at the outlet side so I removed that hose from the filter.

Then I struggled with pulling the filter forward, towards front of van, and down to get it out.

The above picture shows how it doesn’t come out. The charcoal canister, like an annoying relative, kept getting in the way, and the canister’s bracket to the right prevented the filter from coming out… oh wait, why not remove that dammed bracket, doh. Again, two 10 mm hex head screws, and the bracket is off and the filter and its bracket comes out. 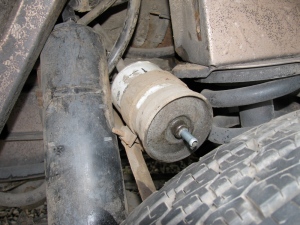 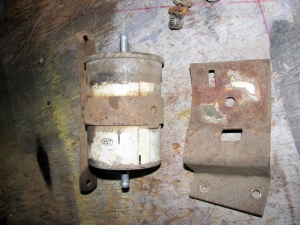 Freed from its bracket, the filter underwent surgery.

The exposed paper filter elements were incised then retracted.

Yuck. I bet its the original filter.

The brackets are painted and now drying, tomorrow the new filter goes in. See that in Part II

This entry was posted on August 3, 2010, 6:24 pm and is filed under syncro, syncro specific repairs. You can follow any responses to this entry through RSS 2.0. You can leave a response, or trackback from your own site.