Attention!!! Maybe some of these mods don’t work. Doing some tests now to confirm. Yes this is embarrassing 🙂

I’m going to try my best to not run down any rat holes in this post, for there are many when it comes to the fridge. I’ll try to stick to the mods that I recently made. Over this last winter I’ve had a couple of westy propane fridges in the workshop, in for some D&C ( that’s dusting and cleaning, not the other). With one of them, I tried out some ideas. First was to insulate the section of corrugated stainless exhaust pipe that really pumps out heat into the van. Just a couple of wraps of Fiberglas tape, exhaust pipe tape.

The next mod was a couple of aluminum plates clamped to the fridge cooling fins to help channel cooling air. I know others have made an enclosing shroud back there, I tried that about twenty years ago and I wasn’t very successful in getting a good fit. This time I reckoned that the plates would maybe do 80% of the job with 100% less effort.

In addition to the plates, I added a bank of three small, very quiet and low current draw, squirrel cage fans.

Here’s the test mule with the mods. At this time there was only one wrap of insulation on the exhaust pipe and I added a programable temperature controller and probe to control the bank of fans. 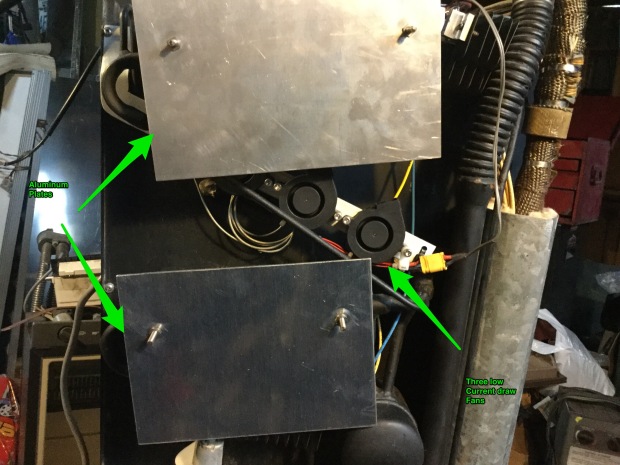 I bench tested this with propane, 120 V ac, and 12 V dc. I fiddled with a programable temp controller and finally decided that even though it was sort of fun to be able to adjust the fan set point and adjust the dead zone ( in effect, adjustable hysteresis) , it really wasn’t needed.

Also found that on propane, the exhaust pipe still gets hot. Not skin scorchingly hot as it was un-wrapped, but still a heat source. Decided to double wrap.

This weekend I duplicated the set up onto my own fridge. I had added a second fan to this fridge some time ago, and I had replaced the stock fan motor with a slightly larger unit. This was working ok, the second fan was fairly quite. Skirting round a tempting rat hole here when I say that I think the stock fan blade works as well as anything in that placement. 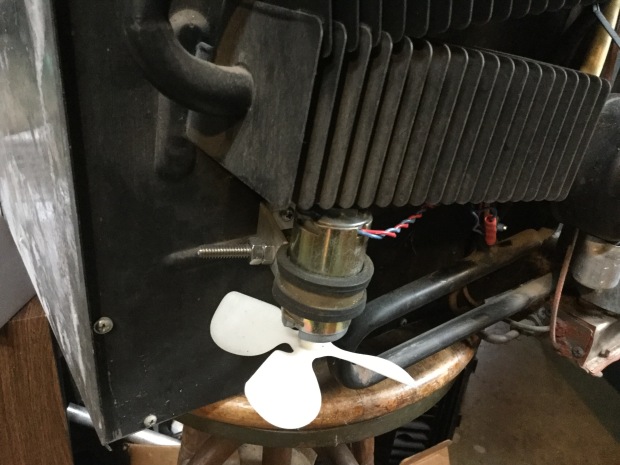 I removed that computer fan and installed the bank of three squirrel cage fans. The fans are wired in parallel to the stock fan. And added the plates.

Plates are held on by hooked ends, the straight ends threaded and nutted. 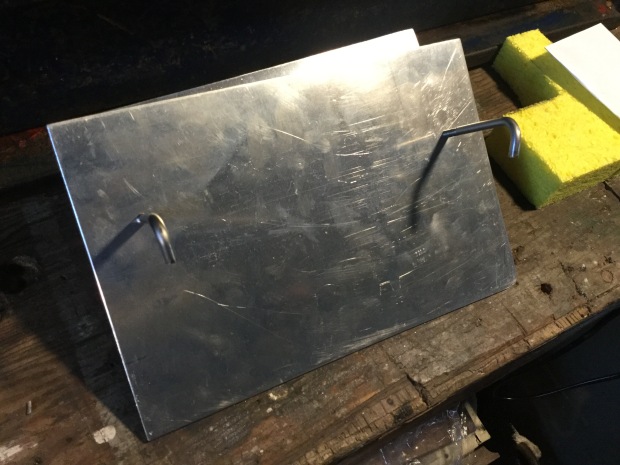 The fans are mounted to a bit of 1″ wide, 1/8″ thick aluminum. Little bit of a dog leg and screwed at one end, the other end cable tied to fridge tubing. It’s in there quite securely, no movement, no rattles. 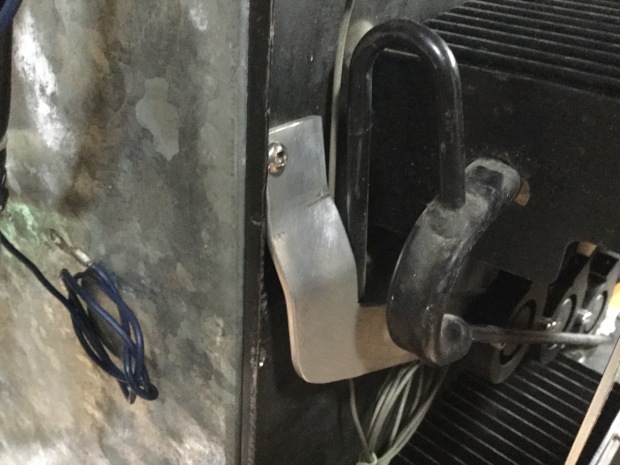 Double wrap of insulation on the exhaust pipe.

I don’t think the insulation will have any adverse effect on the exhaust tubing. I think the stainless will take the additional heat.

A couple of tips on reinstalling the fridge. One thing I did some years ago was to re-thread the intake/exhaust flange for M4 bolts. The original sized holes had stripped out. The socket headed cap screws are nicer to use.

When you’re trying to line the fridge up to install the sheet metal screws inside the cupboards, a slim awl or a pin as shown is a great help.

And the propane connection to the fridge can be a little frustrating to attach. The line up might be off and the access is awkward. A short wrench is invaluable, this old family heirloom is what I use.

You know, I’m not an expert on these fridges but I’ve found that if all the components are working, the electrical connections good, and the combustion chamber ( and gas jet) is clean, then the fridge lights up easily. Believe me, I’ve struggled with the fridge at times, but I think those days are long gone.

Dgbeatty commented that I should look to the finned heat exchangers inside the fridge and re-do the thermal paste. That bugged me, I should have thought of that when I had the fridge out. I replied that I had tried to remove the fins years before but had no luck, they were stuck enough that I worried about breaking something. But I tried again and this time they came off.

That old thermal paste came off with WD40, then a rub with isopropyl alcohol.

Of course I don’t have a tub of thermal paste to re-apply, so I did what any redneck would do, I used anti-sieze. I don’t think that’s as daft as it seems. The MSDS for this anti-sieze states it contains 5-10% (by weight) aluminum powder.

And all back together. Replaced the the little CPU fan I had wired up to the top of the fins ( idea is to circulate the cold air, don’t use it that often) with one of the little squirrel cage fans. At the side of the fins. What the heck, it’s going to move some air.

Thanks Dgbeatty for getting me off my duff.

This entry was posted on June 19, 2017, 12:57 pm and is filed under vanagon, vanagon mods. You can follow any responses to this entry through RSS 2.0. You can leave a response, or trackback from your own site.