This is, and i know there are many strong contenders, the most boring post on this site. You’ve been warned.

It’s funny, I mean funny curious, how we get concerned by things that others think trivial. What I mean is that there are so many cosmetic repairs I have to do to my van but what I end up doing is something minor. This time it’s the pop top seal which, while not completely thrashed, was getting tired.

And the the other funny thing is that I don’t like how many of the replacement seals look. I’m not saying they don’t work well, it’s just that they have a vinyl look that bugs me.

Way back in 2001 or 2002, I replaced the stock pop top seal on my old 82 westy with a bulb seal that I found at a local RV store. It had a nice rubber look and had a generous sized bulb and edge grabbing part. I kept that seal when I used the 82 westy parts to camperized my syncro tin top. The luggage seal was the original VW seal and I kept that ragged thing going with glue repairs.

But it was time to freshen things up and I found a replacement bulb seal. It’s a heavy duty seal that I discovered being used at a local boat company. It’s not cheap, and i had to buy more than needed.

From left to right, an unused portion of the old seal that was left over from the 2001 install, the used old seal, and the new seal.

Right away you can see the new seal has white grippers and a slightly deeper gripping portion. Also has that inside lip that really doesn’t have any effect in the pop top install. 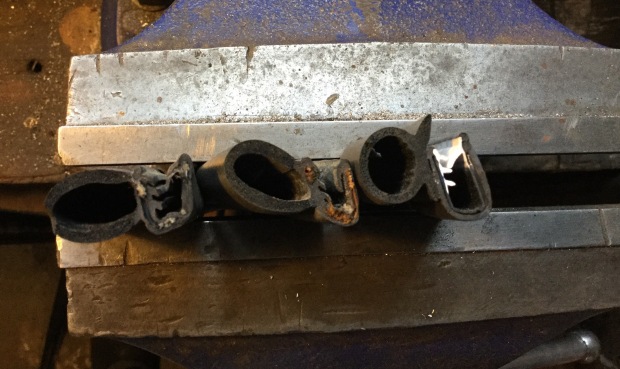 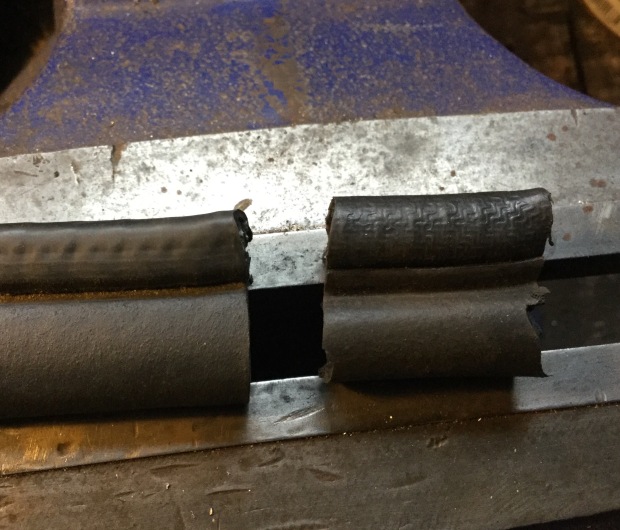 My lord this is boring. Ok, So i bought new bulb seal and I put it on the pop top. Also used the seal on the luggage rack and it worked out just fine. That heavy bulb seal sat down nicely. Left the seal a little short at the rear to let water drain. Maybe I’ll need to cut a channel in the bulb at the front corners for more drainage, we’ll see.

There is one issue with this type of bulb seal on the pop top and I noticed it with the old seal. And that is there is a bit of a ledge between the seal and the pop top that collects dirt. What I might do is run a small bead of clear silicone caulk along the edge. 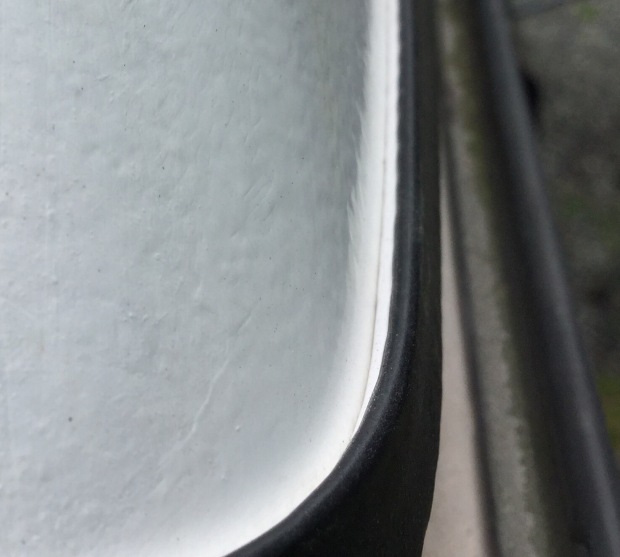 And the decals had really not weathered well. I don’t have one of those rubber wheels that you use with an electric drill to remove decals so I was thinking it was going to be a chore getting them off. But turned out that a plastic scraper and heat did the deed in a jiffy. 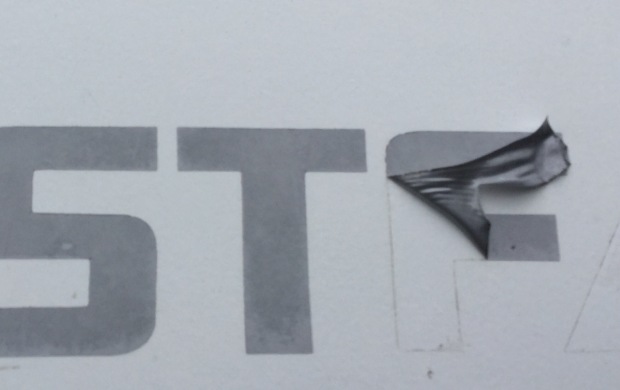 Bit of a tell left after a wipe down with isopropyl alcohol. 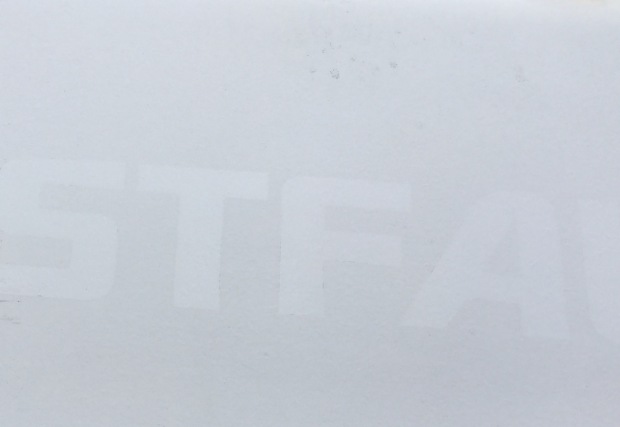 New decal, which btw are 3M reflective black, going on. 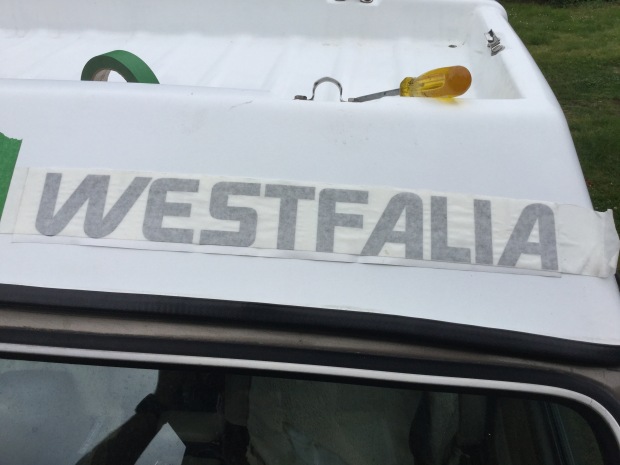 Looks ok, but I’m pants at this sort of thing, never seem to get the decal just right ( you’ll see that with the rear decal) 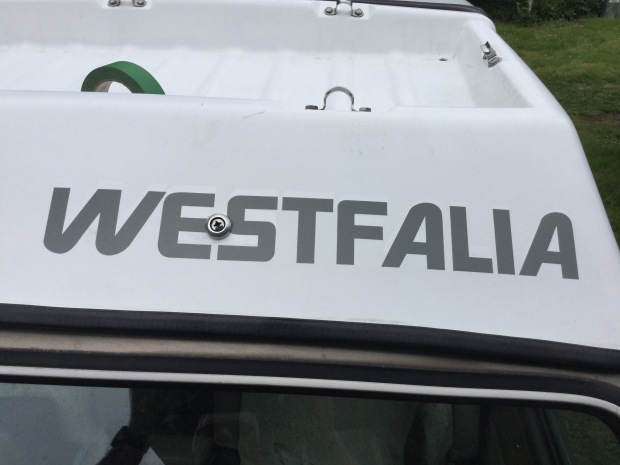 One last boring pic. The van is a daily driver and this is the wet coast of Canada and that combo means lichen on the pop top. Scrubbed the top and the interlux brightside on part poly urethane paint I used 7 years ago ( and only one coat, cheap me) cleaned up surprisingly well. 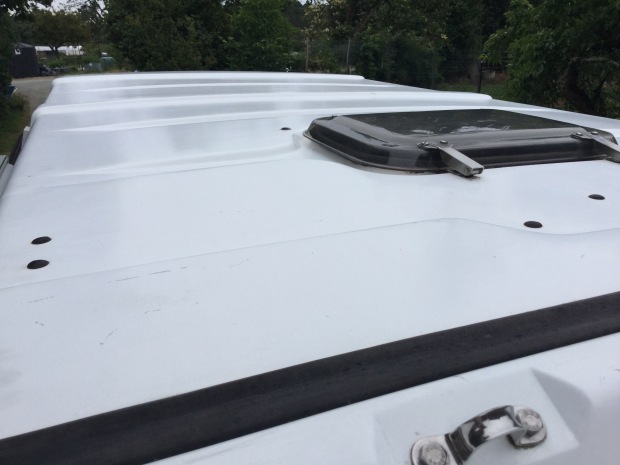 This entry was posted on June 17, 2017, 6:39 pm and is filed under vanagon, vanagon mods. You can follow any responses to this entry through RSS 2.0. You can leave a response, or trackback from your own site.