Vanagon – fooling around with gas pedals

Clossic displacement behaviour, I should have been doing other more important things. But I’ve been sort of obsessed by what I thought was sloppy gas pedal feel. You know, the pedal moving sideways. So instead of looking at my pedal to see what’s what, I put it down to the stock design that uses thin plastic to act as a hinge. Spoiler alert, the hinge was partially broken and that caused the sloppy feel.

But I went ahead and made a couple of pedals to try out. Here they are, pretty rough but as I said I’m just trying things out. I have a spare stock pedal, shown in the pics, I could have just installed that, why didn’t I? 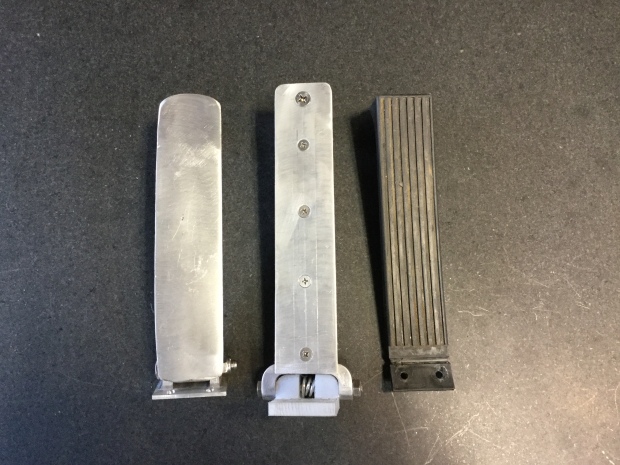 Yes, pretty crude but good enough to try out. I decided on the middle one, has a spring return built in. Thought it might be interesting to see how helping the throttled close will feel. As usual installing the pedal took longer than I thought. You know I have the factory rubber mat laid over the composite foam underlay that came standard with carpet but not with the rubber mat. The rubber mat therefore didn’t fit in quite as nice as it should. It was ok though, but this time when I pulled the underlay out and it broke up even more than before I decided to trash it. There was a bit of surface rust starting in the driver’s side footwell, I wire brushed that and treated it with rust converter then a couple of coats of paint.

The stock pedal was attached to the floor by a couple of pop rivets. I drilled them out and enlarged the holes to take a pair of 10-24 threaded inserts ( I don’t have any metric threaded inserts) . 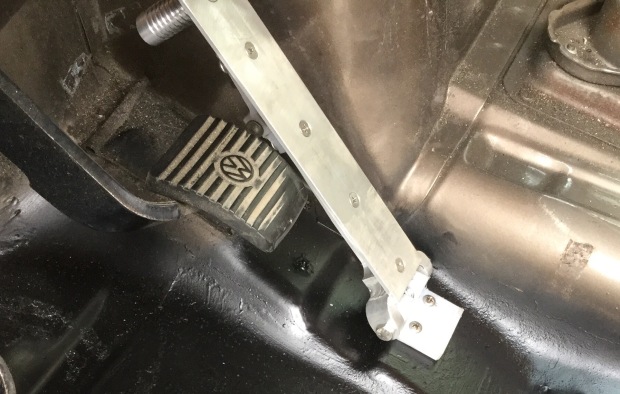 I agree, without that pressed foam underlay will be more road noise coming through the floor. Haven’t figured out completely what to do about that but made a start by sticking down some thin self adhesive asphalt based tape. Yup, tar based not butyl. It’s what I had on hand and I don’t think off gassing or the tape sagging during hot weather will be an issue in this location. Good god but I ramble on.

I have to find a better route for those wires running forward. They haven’t been taped down in place when I took the pic, bout where I did tape them really wasn’t that great. You can feel them under the mat.

Mat back in, pedal installed. The top surface of the pedal is removable. I’m thinking I might make another that is slighlty wider at the top, the extra width on the brake pedal side. It feels ok underfoot and I can feel the resistance of the extra spring. I’ve yet to road test it. 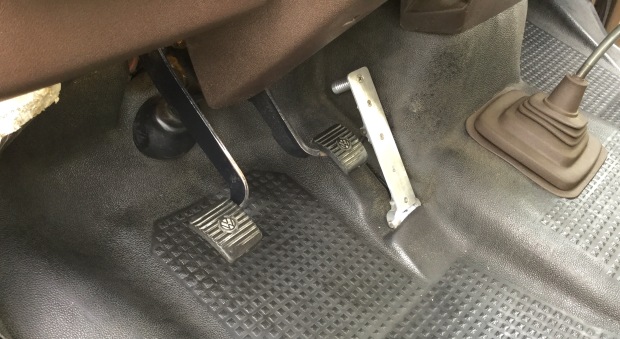 Ok, tried it out on drive to work. Yes it feels firmer, a little more effort to depress it. But I don’t find it a probelm. But what is a problem is that it’s too narrow. It’s approximately the same width as the stock pedal. I know I must be obsessing over this but it bugs me that half my foot is hanging off the side. Do I have some sort of mental issue, i quickly made another pad to replace the narrow one.

Oh yeah, as clunky as it looks, it’s so much better. No really, it is. I mean it, I’m not kidding. It’s the best things since the last thing I thought was the best thing since…

This entry was posted on September 5, 2016, 8:50 pm and is filed under vanagon, vanagon mods. You can follow any responses to this entry through RSS 2.0. You can skip to the end and leave a response. Pinging is currently not allowed.