A rather thin post but since I took pictures I might as well post them up. On our last camping trip the van had a strange missing/bucking/bogging problem. This has happened twice before, always in summer, and always cured by a fill up of gas. So I’m leaning towards the “bad gas” explanation but I’m not ruling out other causes. I have checked and re-adjusted the throttle position switch and perhaps I should take the throttle body off again, take some pics and do a post about that. The next on my list was the temp II sensor. This is the sensor that tells the computer what the coolant temperature is. Not to be confused with the dash water temp gauge sensor. The connector to my sensor was broken and I’ve always wondered if it was making a good connection all the time. I thought that if I was going to install a new connector why not put in a new sensor too. Dave, from Dave’s Automotive in nearby Sidney BC (great guy) found me a connector and wired in a pair of pigtails. So off we go then, with the install.

The sender takes a 19mm wrench, but I didn’t pull it until I spliced in the new connector. 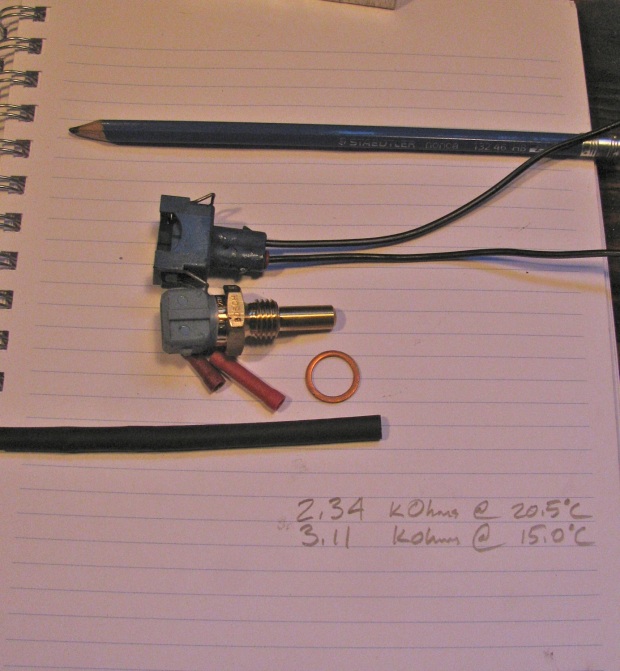 I took a couple of resistance measurements from the new sender, one in the evening and one in the morning. Pathetic eh? 🙂

Here’s a shot of the damaged connector. 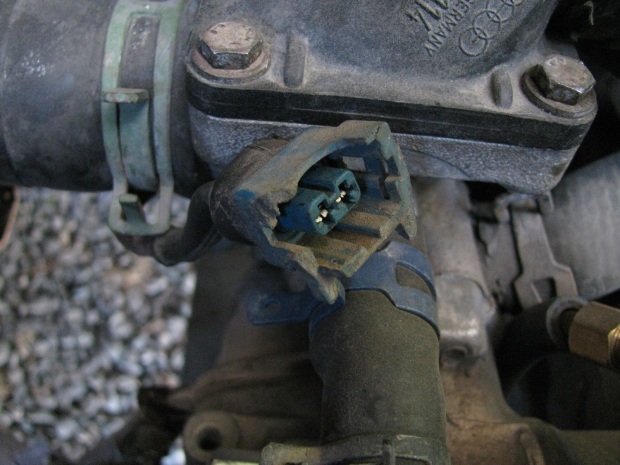 And replacement one spliced in. You don’t loose much coolant at all if you are quick with the sender swap.

New connector and sender in place. The extra wire (and it does help to have extra wire when you splice in situ) is taken up to some degree by one turn and a zip tie on the crossing.

And boy oh boy, the new sender really has transformed the van. No, I lie. No noticeable difference. But then again my strange bucking/bogging problem occurs every 18 months or so…h

This entry was posted on July 25, 2013, 7:54 pm and is filed under syncro specific repairs, vanagon. You can follow any responses to this entry through RSS 2.0. You can leave a response, or trackback from your own site.