Took me a while to do it yesterday. I had to clean up some of my mess to make room in the workshop, and I got confused and stalled by what to do with the heat shield that runs across the rear of the engine compartment about the muffler. I didn’t notice right away that the holes in it for the screws holding it to the van were actually slots, not holes. And I had one screw that would not come out (I ended up die grinding the head off). Turns out the shield comes off with the engine – so there is no need to spend time trying to take off the oil filler tube (plastic part does pull off with a little help from heat gun), or to take off the metal coolant pipe that runs from water pump to T-stat. I thought I had to do all that to gain some space rear ward so I could pull the engine back and off the tranny.

What’s that you say? I thought you were pulling tranny and engine as a unit? I did plan on that, then I realised that if I allowed the tranny to drop 4 inches or so (as described in Bentley manual), I could reach the spots on the tranny that I wanted to deal with (starter electrical connections and diff lock light switch). Leaving the tranny in meant I didn’t have to fuss with CV joints or clutch slave cylinder bleeding. But after all the time I spent trying to get the engine back off the tranny I am not sure I saved any time at all.

A couple of other excuses – no lift/hoist and tight working space. Ok, I agree, lame.

Anyway, the dirty oily thing is out and hanging on the hoist (engine was lowered by hoist and pulled out from under van as it was resting on hoist base). Today begins with shop clean up and transferring engine to work stand.

Here is the engine pretty well ready to be removed. 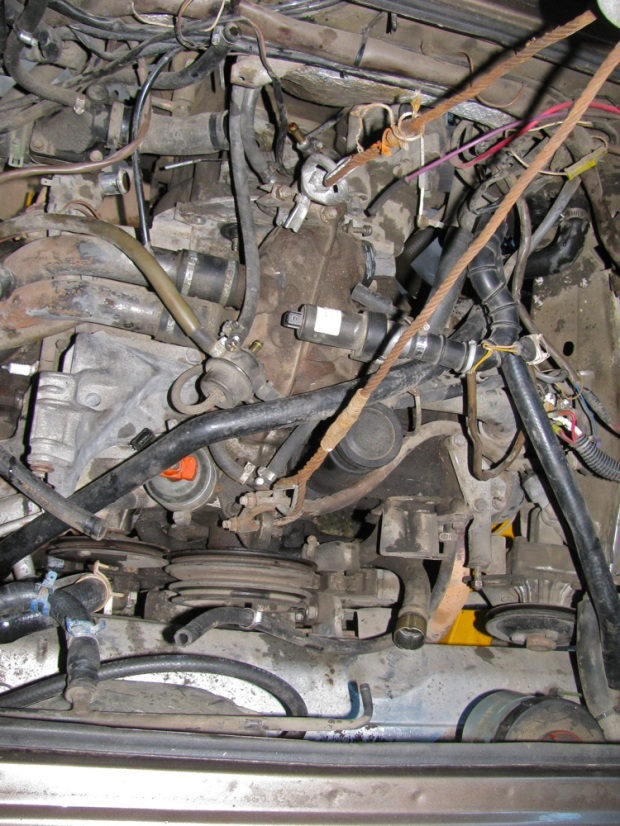 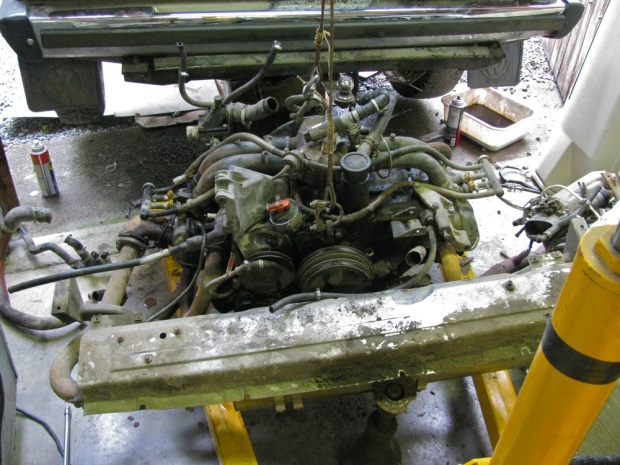 Tranny is resting on blocks in this shot and van rear is raised high to allow engine to come sliding out. No stress that I could see on tranny connections, but van lowered back down after pic taken. I was concerned about stress on CV joints, but I don’t think I’ve subjected them to any great angle. 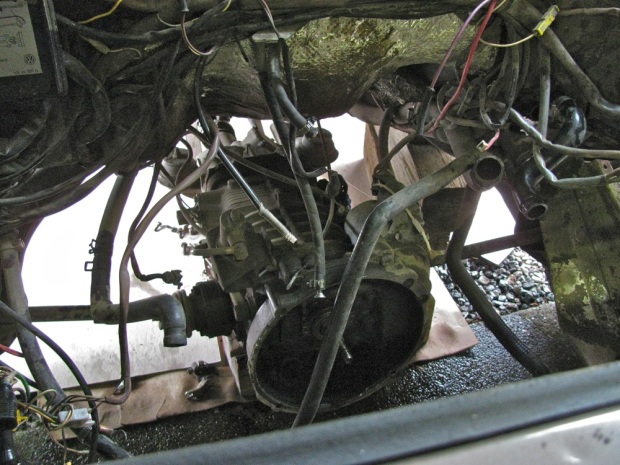 This entry was posted on May 23, 2013, 8:11 am and is filed under vanagon. You can follow any responses to this entry through RSS 2.0. You can leave a response, or trackback from your own site.