It’s not hard to guess that I am enamoured by led strip lighting, but my latest project using the strips is a (qualified?) fail. I’m posting it just to make it clear that I often go down wrong paths.

I had some led strip left over from the step protector project, and I wanted to get some light back at the hatch area. Sometimes we sleep with “heads at the hatch” (more of a summer rather than winter position, but what the heck do you care? :)) and It would be nice to have a reading light back there. A light also could be useful for finding stuff in the dark etc. So how to mount a strip of led lights back there? Well of course a bit of aluminum channel screwed to the back edge of the ceiling – in place of the T moulding – would be the way to go. But I decided I was smarter than that.

I took the T moulding off and went about hacking it up to install the leds actually in it.

The led strip, looks like it will fit behind moulding if T was removed.

After some false starts, I found that my die grinder with a ball end bit cut the T off nicely. 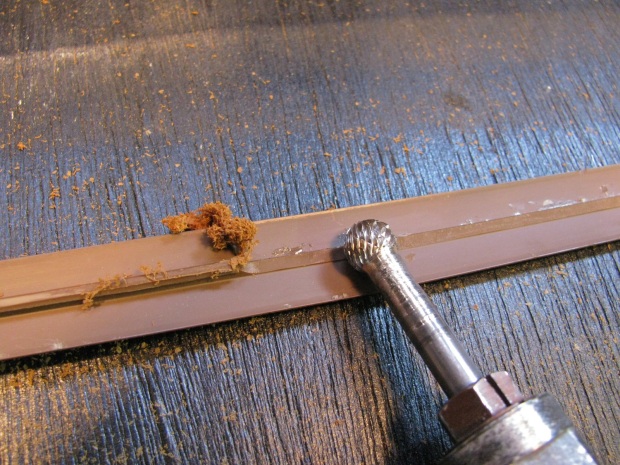 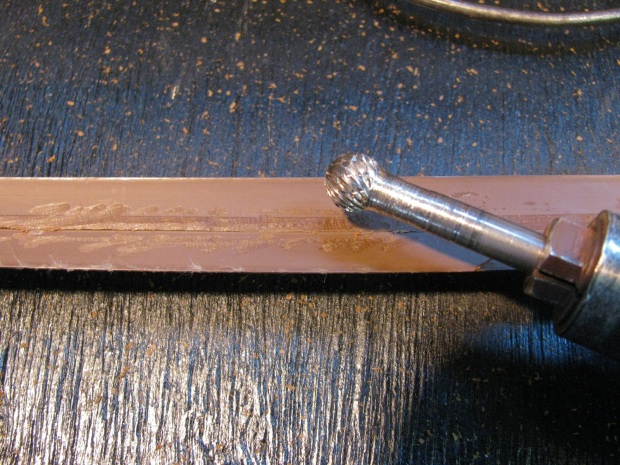 The next part was to drill holes for the leds to peek through. Now I don’t know what system the makers were using to space the led elements, certainly they weren’t thinking about me laying out for drilling. And, every so often the spacing changes as strips are factory joined together. Grrr, I had to drill holes larger than I wanted too. But I kept on going down this path and I glued the led strip face down onto the T moulding. 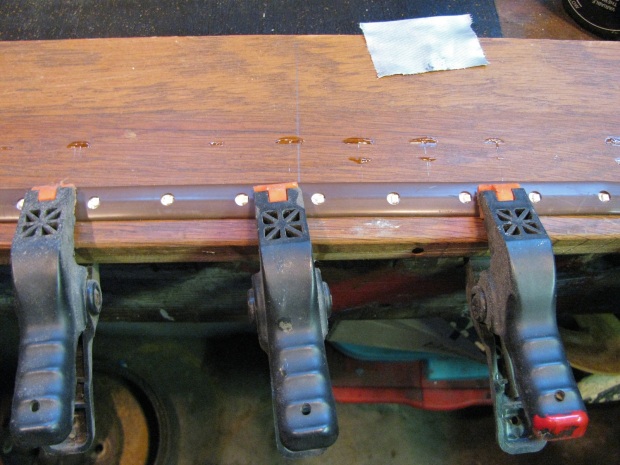 Right then, after the glue had set I took the strip out to fix it up on where it used to be. I have no pictures of the shambles that followed, but imagine the floppy strip, Sikaflex, no real locating mechanism to keep strip from sliding sideways, spring poles that kept falling…

But up it stuck.

It looks much worse in real life. Here is side view.

So what are those aluminum bits at either end? My attempt at hiding areas where the laminate had chipped off the plywood (nothing to do with this project) and to securely hold down the ends of the modified moulding. During the project I had glossed over the question of what kind of switch to use and where to mount it. I tried but came up with nothing better than this switch mounted on a little but of angle glued to side of upper cabinet.

It is not great I know, but there you go. And switching on…

Bloody hell, 3 leds out. I’m sure that when I tested the strip before gluing it on to the cabinet all of the leds worked. I’ve resolved to rip this out and re-do using aluminum channel and new led strips. Will the night time shot make me feel better?

Couldn’t wait until full dark, pics taken at dusk. First one, light off. 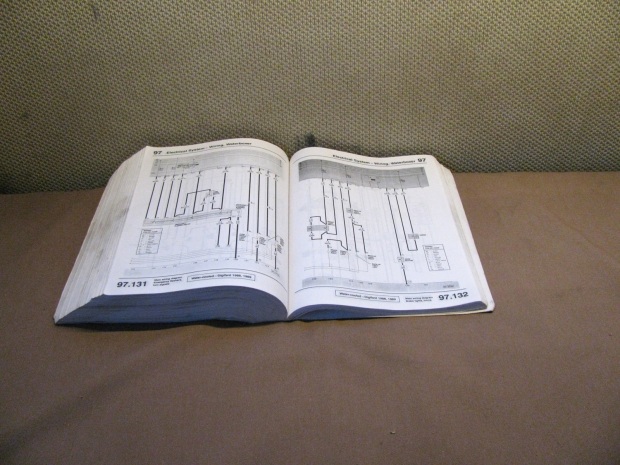 The pics don’t do it justice, there is certainly enough light to read by. And enough to really show up the dirty marks on the fabric attached to the hatch (it is about 12 years old now). All in all I’m pleased with the light, I will redo the mounting, but damn those failed leds! 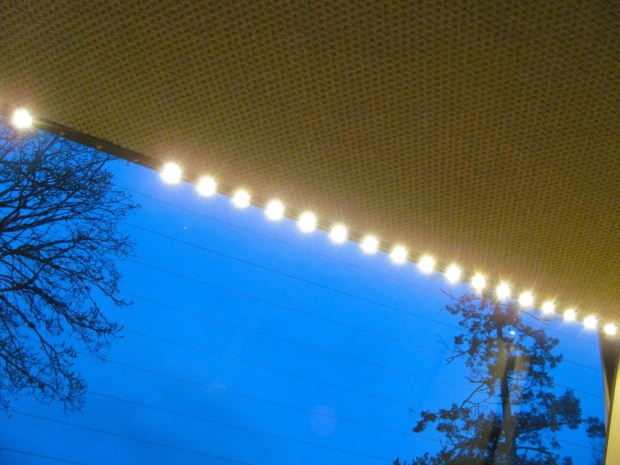 This entry was posted on March 16, 2013, 7:44 pm and is filed under vanagon, vanagon mods. You can follow any responses to this entry through RSS 2.0. You can leave a response, or trackback from your own site.