I’ve been wanting to have some led strip lighting in the van for a while but never got around to ordering any online. But a few weeks ago I found some led strips at local hardware store and even being on sale they were pricey ($43 each), but I fell for them. You can do much better price-wise online.

The strips are 2 m long each, with 60 smd leds per strip. That’s a good led density for this application. Calling leds “warm white” is so subjective, a little better descriptor is colour temperature, and these were listed as  correction, 3000 K. The strips came with a small inline transformer to change 110V AC to 12 V DC. We don’t need that for the van, but we do need some sort of switch. I decided on an inline dimmer/controller from Superbrightleds.com, this one. I ordered 2, one for each strip. When they arrived I realized that perhaps an inline dimmer is not the best way to go, would be better to have a wall mount. Time for some metal butchery. The same old thing with me, going the long way around.

I really just eyeballed the milling (used the wee milling head for my lathe).

Then a half hearted clean up. I need to get a better countersinks, see the chatter marks in the holes, especially the mounting screws?

And the dimmers added.

The milled slots use now clear. Can I draw your attention to the black heatshrink on the ends of 2 pairs of wires? I forgot to remove one of them, grr. 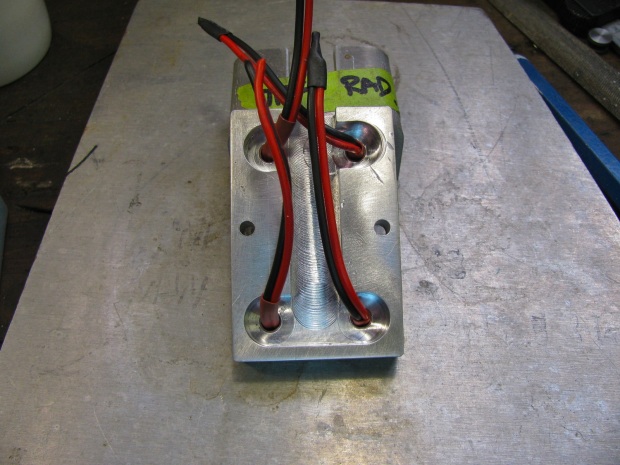 I secured the wires to some extent with some Goop. The heat shrink job was redone a couple of times after this, you’ll find out why.

And installed on top front inside corner of the wardrobe. I figured I could reach the dimmers when lying in the lower bunk.

The leds strips were installed in two places: one on the underside of the kitchen trough so that it pointed straight down. The other on the angles face of the slider door valence. The latter shines in and down. So I wired the strips to the dimmer and during the process forgot about one of the heat shrunk wire ends, and I shorted one dimmer which let out a little magic smoke. Stupid mistake eh? I left the broken dimmer in place and re-rewired things so that the remaining dimmer controlled both strips. Troubleshooting this screw up resulted in re-doing a lot of connections, sigh.

This pic makes the slider door side strip seem brighter  and more glaring than it actually is. 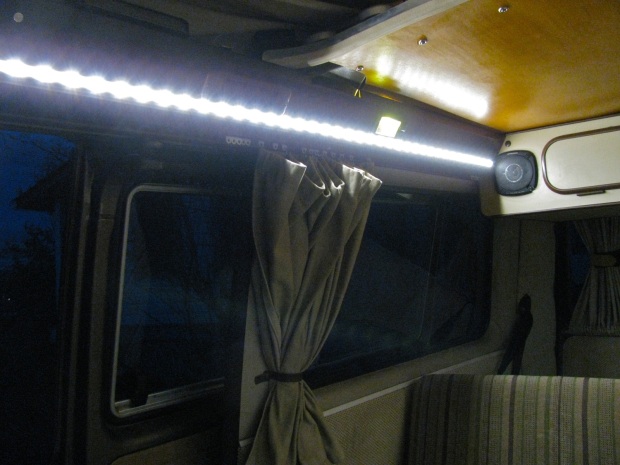 The kitchen side strip has no real glare, I’m guessing the beam angle of the leds is about 120 degrees.

I’m very happy with the amount and quality of the light these strips make. I’d like to add more, and maybe even some RGB strips and a colour mixer.

Addendum : I forgot to mention how much power the lights draw – if I recall correctly it is around 4.8 W per strip. I know nothing of how PMW controllers work, ie how much power is used by controller and strip when light is dimmed down low.

I did some measurements with my installed Doc Wattson. Measuring current flowing from my aux battery.

For interesting comparison, kitchen water level/battery meter panel on, led lights off, between 0.2 and 0.3W, between 20 and 30mA.
So the led dimmer control draws a little power even when off, but it is less than the “switched on”  kitchen indicator panel.

So the led strips, both sides combined, only draw 140mA power at lowest brightness. And that low setting is pretty good for a standby/casual use light.

This entry was posted on February 23, 2013, 9:29 pm and is filed under vanagon, vanagon mods. You can follow any responses to this entry through RSS 2.0. You can leave a response, or trackback from your own site.