I pulled the front diff. on the syncro today to replace the old failed (weak) viscous coupling (vc) with a good used one. Dropping the diff. is in the Bentley manual so I won’t describe that part except to say that it takes a bit of wiggling to get it out. I used a motorcycle lift as a transmission jack. Once out I set it on a container to drain. 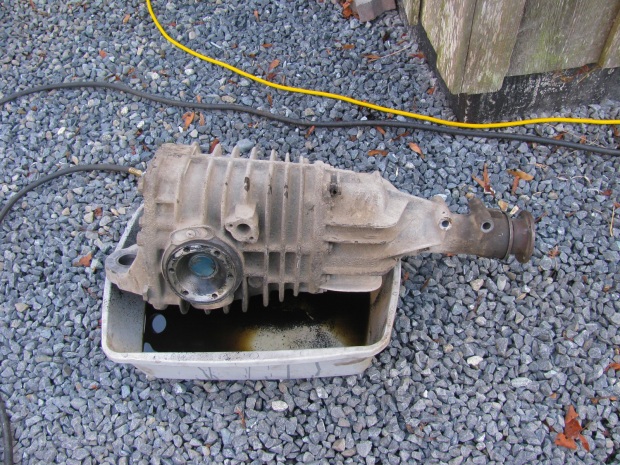 See the dark dirt on the input end? Looks like the oil seal there is leaking, need to attend to that. Once most of the oil drained out I humped it onto the bench, just to look at it.

See the speedo drive sticking out? Then it’s on to the floor and off with the 13mm bolts holding the skinny end on.

Some tapping with soft faced hammer to break the seal and it comes apart. 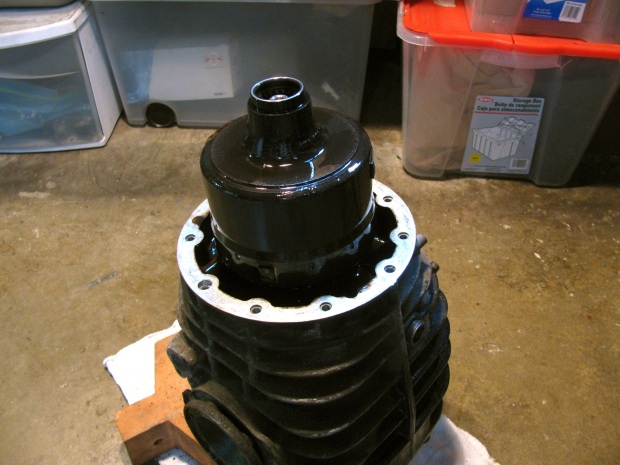 Yup, that’s the vc sitting there, with a spacer on top.

The vc just lifts right off, exposing the speedo drive gear on the pinion shaft. 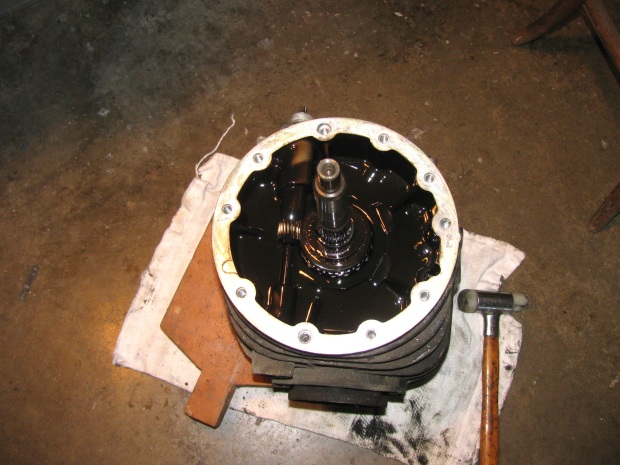 With the case separated I drained the remaining oil, applied some sealant to the mating surfaces, put the new vc on the pinion (and didn’t forget the spacer) and the skinny part of the case re-installed and torqued down. All well and good, refill with oil in the morning. Now the interesting bit. I had to take the end plate off the old vc, I was dying to see the inside first hand. The big C-clip came out easily.

That end plate should then pull out, but it wouldn’t come. I thought maybe if I drained the vc and also run an awl around the edge of the plate to remove gunk it might help matters. The silicone flowed out, not as viscous as I have seen in those German videos showing refills, and looking like it might have some gear oil in it. BTW, didn’t smell bad.

Got the end plate off. 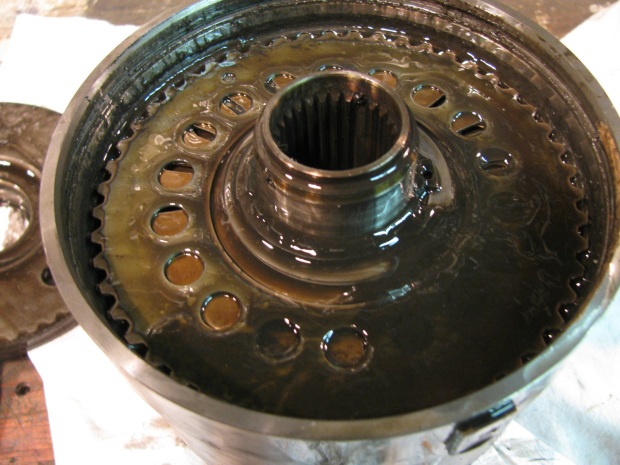 Removed the C-clip on the shaft (barely visible in above pic) and pulled the first two plates out to look at the adjacent surfaces. Need any more evidence that the plates do come in contact during hump? Upper plate in pic has been flipped over.

Accepted wisdom is that a weak vc is due to the silicone fluid leaking out. One could expect an O-ring to fail with time, but what I found was something else. I had a look at the X-ring that seals around the central shaft (there are two, one on each end, the one shown is in the end plate). It appears that the X-ring is twisted in the groove, look.

Out it comes, yes, it is twisted.

This surely must have happened at the factory, a lip of the X-ring getting caught on the shaft during assembly. Tsk, tsk,  Steyr-Puch.

Addendum: I’m assuming the vc had leaked some fluid, but even with that folded X-ring I have no proof. The “dirty” fluid from the vc could be gear oil contaminated or it could be metal particles from the plates. Perhaps I can use a magnet to determine?

This entry was posted on October 23, 2011, 8:52 pm and is filed under syncro, syncro specific repairs. You can follow any responses to this entry through RSS 2.0. You can leave a response, or trackback from your own site.