Well I’ve finished my experiment with trying a new kind of pop top ceiling treatment. An earlier post showed how I had stripped the old worn flocking off the ceiling and I had the idea of attaching a closed cell foam ceiling treatment. I did not want to glue the foam directly to the top, but rather have it removable. What I ended up with is not what I had envisioned, but isn’t that often the case?

I attached (screws every 20cm) some 1/2″ X 1/2″ aluminum box section to the sides of the top, that moulding that the canvas attaches to. This will be to support steel straps across the ceiling that the foam is glued to. The also will serve as a wiring chase.

Here is a shot of the aluminum box tubing at the front, same thing is happening on the sides and rear.

The difficult decision was how to treat the skylight, latch, and pop top strut attachment points. I decided to cut generous openings in the foam and then cover the exposed ceiling with the same polyester fabric I used to cover the foam. 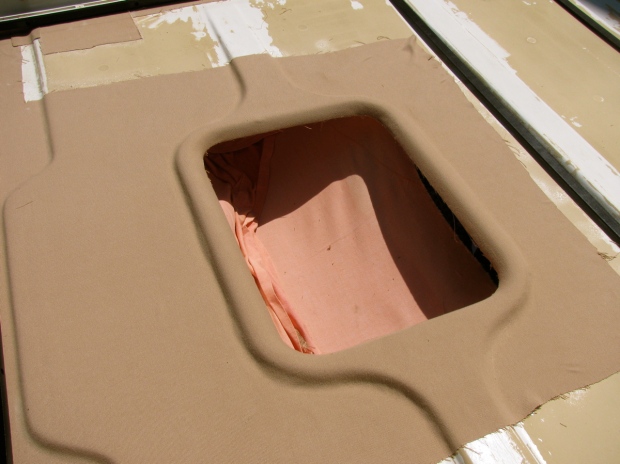 I used 3M 77 spray adhesive to glue the fabric to the ceiling and the foam. It wasn’t 100% effective, I have some spots were the fabric did not adhere. It is probably user error. The fabric was glued to the foam, and the steel straps to the the other side of the foam. I used some velcro to hold the areas around the cut outs, you can see how the “pad” is not tight to the top in the pic, it is better with the velcro.

After a couple of days, more wrinkles appeared, grrr. The aluminum section on the left hand side is not attached in the following pic. 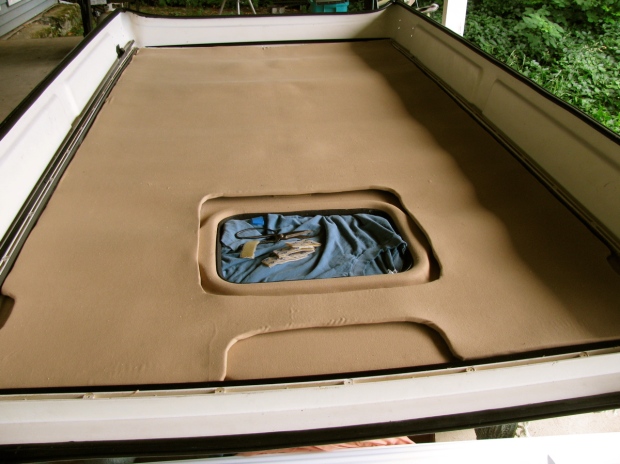 Well live and learn. I’m really tempted to glue on some tan short pile indoor/outdoor carpet to the roof and only use the foam pad in winter. Oh, and another curve was thrown my way with this project, the foam expands and contracts with heat a lot more than I imagined. It meant that the pad could not be closely fitted and probably contributes to the wrinkling.

This entry was posted on July 12, 2011, 7:45 pm and is filed under vanagon, vanagon mods. You can follow any responses to this entry through RSS 2.0. You can leave a response, or trackback from your own site.