R. Jones pushed me into this, he wanted to see how it all goes together. I’ll go through it on point form, pictures and text. Bentley has an exploded view and instructions for back up.
On the way out to the workshop I noticed a cool spider on a leaf of one of the jade plants we put outside for the summer. Got a quick snap before it moved. If you want good pics, head to A. Gordon’s Wordlessme.

Back to the job, first unscrew gear lever knob and pull off the rubber shifter boot. Then mark the position of the upper plate on the lower plate. I scratched circles through the two holes in the upper plate.

No need to remove the two 10 mm nuts you see there right now, we will be taking the two plates out together. Then it’s under the van to drop the spare and remove the shifter box, four 10 mm nuts and washers, careful, they drop easily 🙂 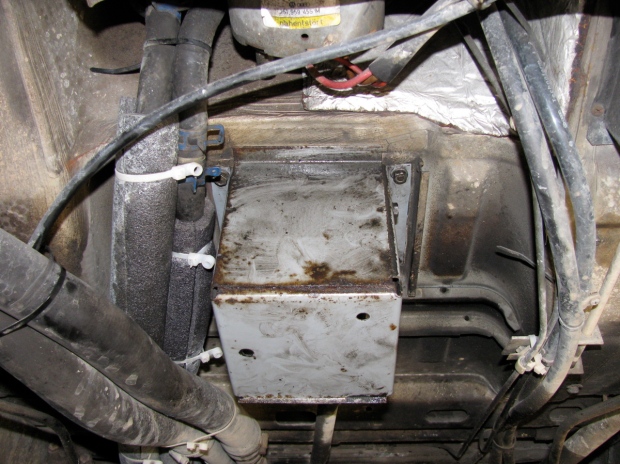 Now remove the vertical from the horizontal between the “ears”. It’s a 10 mm stover nut and a washer on one side, and a 13 mm headed bolt on the other.

Now you can get back into the van and pull up the plates and shifter, and take it to the bench for disassembly. 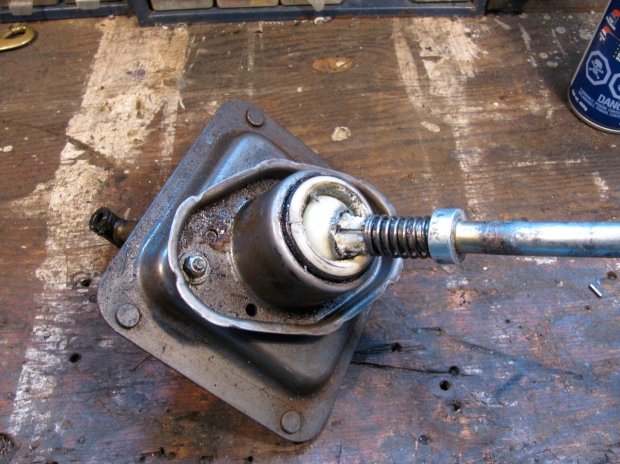 There is a set screw on that metal collar on top of that spring, hold it tight as you back the screw off and remove collar and spring. The shift lever will slide out of the housing assembly. Look at the “T” end of the lever, remove the 2 plastic bushings. These are wear items and it would be a good idea to replace them. 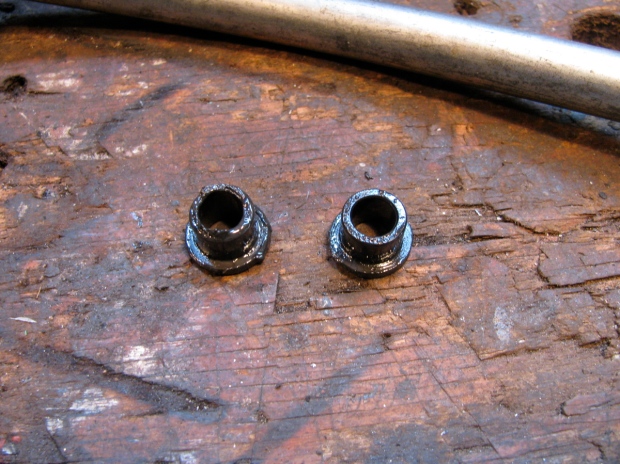 I didn’t as I did not have any on hand, and I couldn’t be arsed to make some up. The bolt that rides in there looked a bit worn and I suppose the small amount of play in there does contribute to the overall feel of the shifter. Here is the bolt back in the bushings. 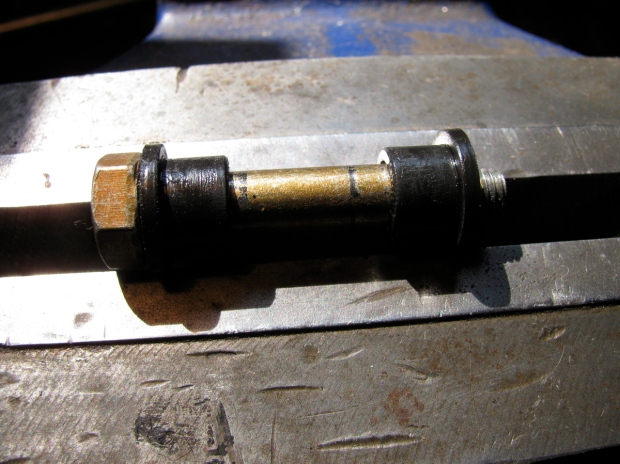 Back to the other parts, now you can remove the two stover nuts holding the upper and lower plates together, you did mark position of the two plates first right? The white plastic collar on the underside of the upper plate is pried out. 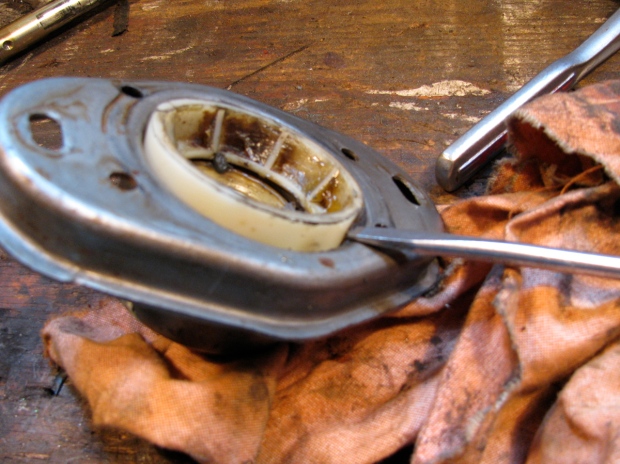 Then the entire inner workings, rubber collar and all, can be pushed out from top to bottom. It might be tight, but palm pressure is enough to do it. Careful not to break the upper plastic. 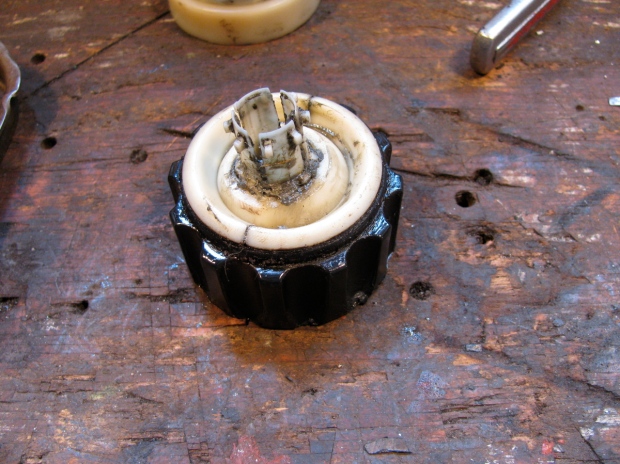 The two white plastic bearing shells can be pried out of the rubber and that will allow an internal spring to sproing things apart.

Now clean all the parts. 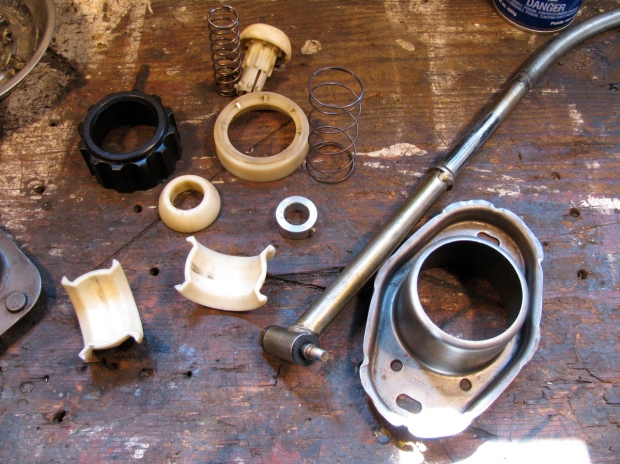 Reassembly is pretty straightforward, first squeeze the split shells into the rubber collar, might be a bit of a struggle. 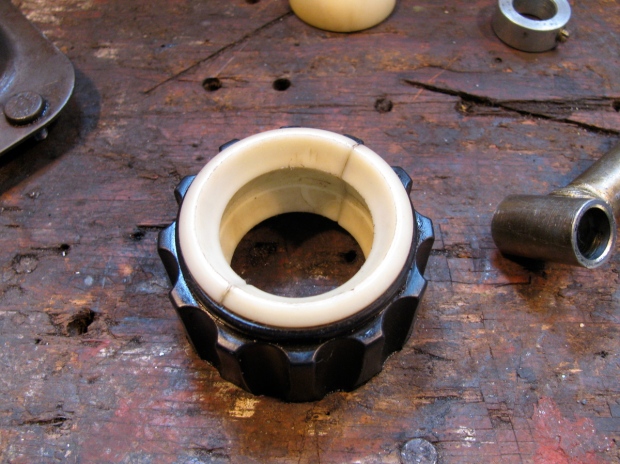 Then the one inner bearing with the protrusion is pushed in from below until it snaps into place. Good time to put a little grease on the rubbing surfaces. Not too much, Bentley makes no mention of lubricating the plastic assembly and I have seen some that are caked in grease and dirt, so it is probably best to go light with the schmalz. Do, however, put a dab of grease on the gear lever where it goes into the plastic assembly and in the bushings on the “T’ at the end of the lever. Note that the rubber collar has a “top”, the little ridge, see? Sorry about bad focus in the next couple of pics. 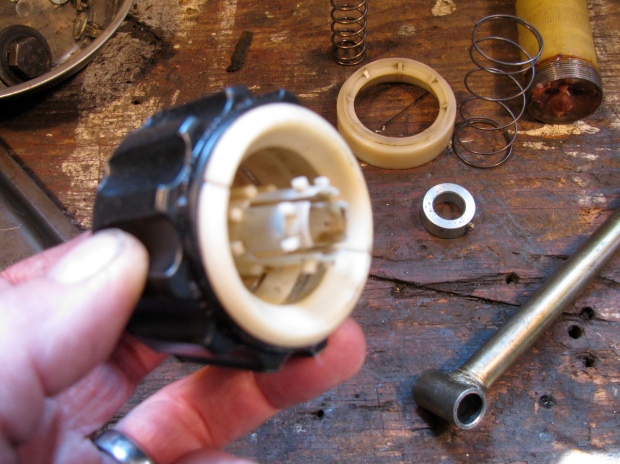 Then put the larger of the two springs on.

And press the upper bearing into place, again it snaps in. The rubber collar allows the split shells to spread.

This assembly is now pushed into the upper plate.

Followed by that plastic collar.

Put the upper and lower plates together and secure (in the right place using your marks) with the two 10 mm stover nuts. I risked Zinc and or Cadmium poisoning and buffed up the shift lever. The lever is inserted into the bearing assembly, the spring put on, and the collar locked down in place (there is a dimple on the shaft).

Out to the van, and pop the gubbins in. 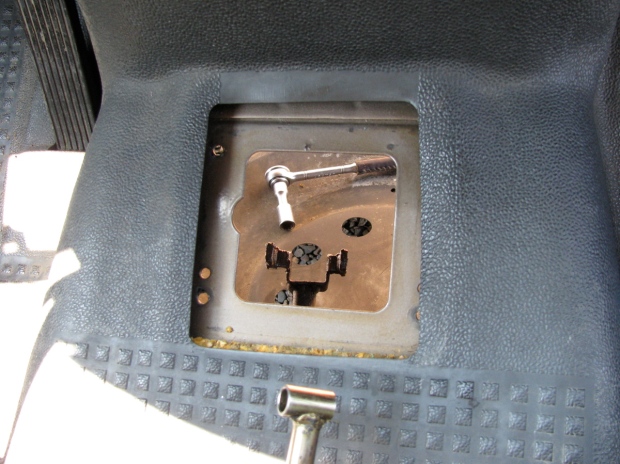 Then under the van to connect the shift lever to the ears using that bolt and bushing arrangement. Bolt the box back on and put the spare tire and tray back in place. Back upstairs and rubber boot and shift knob back on. 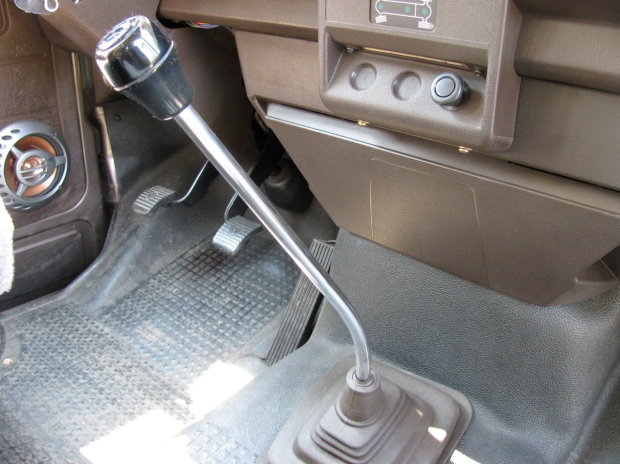 That’s it. Oh, I suppose I should have mentioned that you can get replacement plastic parts for the assembly from the usual suspects, Van Cafe, Go Westy, Bus Depot etc. I re-used the old parts, they seemed to be in OK shape.

This entry was posted on May 29, 2011, 1:19 pm and is filed under syncro, syncro specific repairs. You can follow any responses to this entry through RSS 2.0. You can leave a response, or trackback from your own site.