Finally, we were able to take off for a weekend trip to one of our favourite places. Weather was to be hot and dry. Packed up Saturday morning and headed out. Alternator light started to glow before we got out of town. Shoot, it came back to me that when I did an alternator overhaul this last winter I made a mental note to replace the brushes soon. Mental note got lost. Had a spare voltage regulator in the van (used, but brushes still workable) and swapped it in. That solved that but then the van started to run oddly. Idle would drop and engine die, ran a little rough. We headed to Simons house to use driveway and I poked and prodded connections etc. Moved the O2 sensor wire away from a spark plug wire. That’s all I could do. Headed back home and the van ran fine. Took the chance and turned around and continued trip. Engine ran well for the rest of the trip. Sooner I put in a new motor the better, it’s so frustrating to trouble shoot this old engine and wiring.

I bought new tires last week. I was running Yokohama Geolandar ats, 215/70 15. New ones were the replacements for the ats, the Geolander GO15. And I went for largest ( some say to much ) that you really should put on the van with stock motor, 215/75-15. Was expecting more of a performance hit than I actually felt. Yes, I did have to downshift on hills that previously I hadn’t needed to, but this was much more apparent on the pavement, not so much in the logging roads ( travelling much slower on those roads).

The ride quality of these new tires are very much better than the old ones. Yes, a little louder on the pavement but smoother ride and on rough roads they soak up the harsh bumps way better. Great grip on loose stuff, and I didn’t notice the lugs getting cut by sharp rocks.

Shade temps were hitting 30-32 C when the breeze dropped. Sun intense, no fog on the ocean ( oh that will come in July and August), just perfect.

Brought the large westy table with us, and it works on the Swellegant™ table mod even better than the smaller table. I’m telling ya, it’s one of the best things I have ever invented.

Dinner was marinated thinly sliced skirt steak on skewers grilled on the Ecoque. 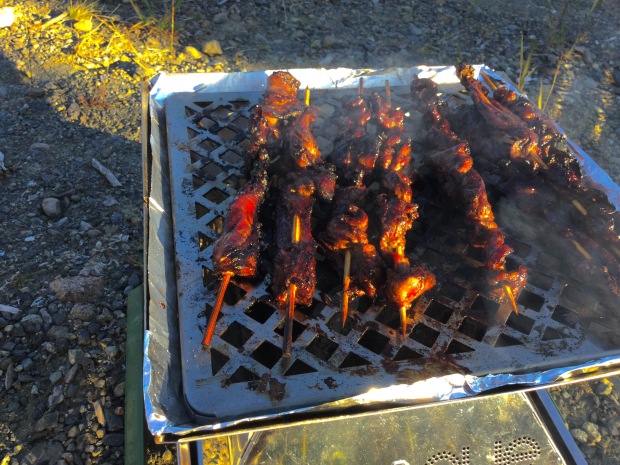 With salad and wrap.

Magnets holding a reflective tarp over part of the side of the van to give the fridge a fighting chance.

If you look towards the horizon, just to the left of that awning guy line, and if you could fly in that direction, the first land you’d encounter would be New Zealand. Amazing eh? 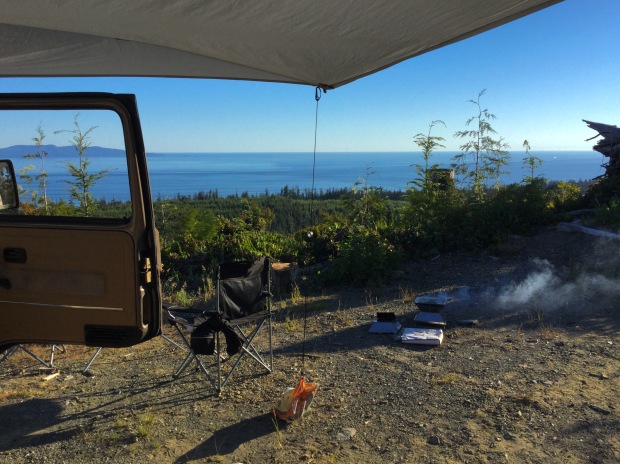 We pretty well just sat, read, drank, ate, enjoyed the view, looked at the marine traffic. Saw no bears, elk, deer. Nighthawks were there though, and a couple of rufous hummingbirds that really liked the red campchair.

This entry was posted on June 26, 2017, 12:06 pm and is filed under trips, vanagon. You can follow any responses to this entry through RSS 2.0. You can leave a response, or trackback from your own site.